The Fans Return in St. Louis

Share All sharing options for: The Fans Return in St. Louis 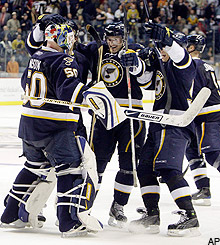 For many, many years, the St. Louis Blues were among the best supported franchises in the NHL. Thanks to their placement in the Western Conference following the 1967 expansion with all of the other expansion franchises, the Blues qualified for the Stanley Cup Finals in the first three years of their existence. And even though they were swept every time in those three Finals, the relationship between the city and its fans seemed cemented forever. â†µ

â†µPerhaps just as impressive, the Blues qualified for the postseason 25 years in a row between the 1979-80 and 2003-04 regular seasons, the longest streak in the history of the NHL. Wrap it all together with heart and soul players like Red Berenson, Bernie Federko and Brett Hull, and it seemed as if the love affair between the Blues and the city of St. Louis would never end. â†µ

â†µBut then the wheels came off the bus after the lockout. With the team crashing through the standings and dealing many of its most popular players at the trade deadline, the Blues dropped from sixth overall in league attendance (18,560) to 27th (14,213) before cratering in dead last (12,520) for the 2006-07 season. â†µ

â†µWith the arrival of new management under Team President John Davidson, the Blues rebounded last season to 13th overall (17,610) through the use of some innovative marketing -- particularly free food nights and a nifty television spot where individual players made their pitch to woo back the thousands of fans who had suddenly disappeared. Toss in the signing of free agent winger Paul Kariya, and the Blues had given the locals a reason to care again. â†µ

â†µThe improvement has continued into this season, with the team now ranked eighth overall (18,961) and ahead of two Canadian franchises, Vancouver and Edmonton. The St. Louis Business Journal has the rest of the numbers: â†µ

â†µâ‡¥A near-capacity average of 18,800 fans passed through the turnstiles through the first eight home games this year, a 7 percent improvement from their first eight last year, and 1,000 more per game than their full season average in 2007-08. The team registered seven sellouts in its first nine home games, and season ticket holders now number about 9,500, up from 5,600 when SCP purchased the club in July 2006. The season's strong start builds upon a league-leading 41 percent attendance increase last year. â†µ

â†µAlso helping things has been the announcement of the "Blues Bailout Plan," which we detailed here a little more than two weeks ago. According to Sports Business Daily, the team has sold more than 3,500 tickets since the announcement of the promotion, which will select one fan to receive up to $1,000 per month for four months towards their rent or mortgage payment. â†µ

â†µOf course, the fact that the team is playing close to .500 hockey while icing a young and exciting lineup hasn't hurt either, but it's nice to see an NHL team working their fan base as hard as some minor league franchises. And with the economic winds blowing in an unfavorable direction of late, there are probably a few lessons a number of other teams could learn from the Blues. â†µ