Share All sharing options for: Charlie Weis' Buyout Is a State Secret 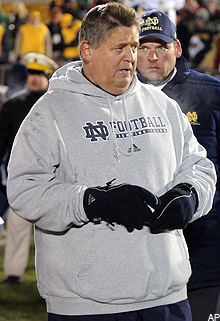 Dan Brown's next Vatican-centered thriller should center on the mystery of Charlie Weis' buyout, a number so secretive that to know it is to instantly place your life in danger. If you are currently being chased through the Vatican by shadowy figures, call us, because if you told me I would be the only member of the media or its bloggy suburbs to know the real number. â†µ

â†µWeis' second straight year of struggling to beat the San Diego States of the world has made the buyout an issue. Notre Dame, wanting to win those games decisively and add other real victories onto that, has allegedly considered exercising it and landing Weis' well-padded butt on the curb. (Poor, sweet curb. You didn't deserve that.) â†µ

â†µThe New York Times goes with Peter King's number of $21 million ... or $15 million, since no one knows whether that number refers to the buyout if Weis leaves for another job, or if it is what Weis gets if he is fired. Either way, the number is nearly immobile in terms of moving Weis. It would be the largest buyout in the history of college sports, and a crippling blow to even the mighty bankroll at Notre Dame. â†µ

â†µTeddy Greenstein -- who has been hammering Weis in a factual but brutal way for the past month at least -- says both numbers overshoot the real sum by miles. Weis' buyout according to his sources is more in the $4.5 million range, a sum described charmingly by one source as "loose change." He also continues the hammering by including this unsourced quote: â†µ

â†µâ‡¥"He has built zero relationships at the school," one source said. "It has been all about him and his ego." â†µ

â†µWhatever the monetary cost to move him, there's also an even more mysterious question: how much will it cost to keep him? NBC's contract with Notre Dame extends through 2010, and the ratings news from last year was dismal enough. As a primary shareholder in Notre Dame, Incorporated, NBC may not have a direct say in whether Weis goes, but let's just say they have to be interested. â†µ

â†µIf Notre Dame does fire Weis and need a coach for the bowl game, the cross-promotional possibilities are boundless. Watch as Steve Carell serves as interim coach Michael Scott! Thrill as Rainn Wilson exhorts the student section dressed as the Notre Dame leprechaun! Watch as NBC squeezes The Office ratings beast until it bleeds! Only on NBC! â†µ