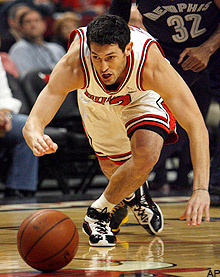 Not quite sure what it says about the universe that Sam Smith, once a giant of the sports fourth estate, now writes for Bulls.com. Fortunately, his stuff there is pleasantly -- as much as Smith is ever "pleasant" -- acrid, like the franchise decided to keep its longtime enemies closer. Even if it's a generation too late. But hey, at least now he has real sources. You'd think. â†µ
â†µ
â†µThat's why I'm putting more than a little credence in this rumor, which goes from the premise that Kirk Hinrich is expendable. The logic: Hinrich's currently at shooting guard, and once Larry Hughes is back, size conquers all. So even though "Hinrich has more assists this season than Rose and is leading the Bulls in shooting at 50 percent, including 63.6 percent on threes, which is ninth in the NBA in the first week," and Hughes is terrible, true PG Captain Kirk is doomed to the second unit, while plenty of teams could use him as a starter. Al Harrington is available, and might be a good fit for the Bulls. â†µ
â†µ
â†µSmith, however, is convinced that the PG-strapped Dubs might go even a step further: â†µ

â†µâ‡¥The interesting part is given the Warriors' desperation and that Hinrich would seemingly fit well with Nelson's motion game, you might be able to get the Warriors to part with some of their young prospects who Nelson doesn't use, like Brandon [sic] Wright and rookie Anthony Randolph. I think both will be good, though I like the 6-10 Wright better as he seems to have more offensive ability inside. Could the Bulls make a steal? â†µ

â†µRight, because when both teams are looking to, even forced to, deal, one always ends up jerking the other. This scenario later devolves into a three-team deal involving the Knicks, where the Bulls nab MSG darling David Lee because Harrington's expiring contract makes him doubly attractive to them. I have no idea if all this means that Smith's as fatuous with sources as without, or is proof that talk on the inside really is as stupid as the rumors we hear. On second thought, after re-reading Sam's take on Beasley/Rose -- "It seems obvious the Bulls made the right selection as Miami continues to stumble around with bad losses to miserable Knicks and Bobcats teams while Beasley already has embarrassed the franchise with a rookie orientation incident" -- I think we can still safely ignore this dude. Even if he's sponsored by the league.â†µ