The Deciding Issue in This Election: Your Butt

Share All sharing options for: The Deciding Issue in This Election: Your Butt 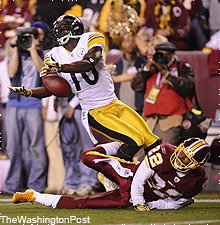 The day is finally here. It’s time to exercise our right, our duty, as Americans to wait in a line for two hours and vote. It’s a thrilling process, if for no other reason than to get away from your desk for a bit. â†µ

â†µBut if you’re one the few out there who is thinking about not voting, or still hasn’t decided (I have no idea how these people exist, but apparently they do), then Redskins cornerback Carlos Rogers is here to give you the kick in the pants you need to get to the booth. After Rogers was finished not catching easy interceptions and not covering anyone and not adhering to the dress code with his neon orange cleats, he had this to say about the election: â†µ

â†µâ‡¥"Hey, like a lot of people said, one president gonna stick it up your butt, the other one's gonna stick it further in the butt, so it don't matter, man. Whatever happens, happens. That's something we can't control." â†µ

â†µI actually haven’t heard anyone say that, but Carlos and I obviously roll with different crews. Regardless, you need to get out there and vote, if for no other reason than to save your own ass.
â†µ
â†µOh, and if neither McCain nor Obama do anything for you, it's not too late to consider writing in the Cooley-Portis ticket. If nothing else, that White House would be quite stylish ... and nude.â†µ