More on the Iverson-Billups Trade: Positives From Denver's Perspective

Share All sharing options for: More on the Iverson-Billups Trade: Positives From Denver's Perspective 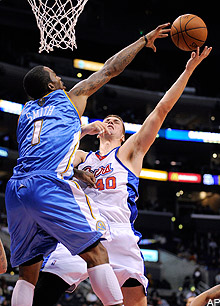 When news of the Iverson/Billups trade first went down, I made it clear that both teams did well -- the Pistons just won out on all fronts. I don't buy the argument that Billups will break down, since he's never depended on physical gifts, or that his injury-plagued 2008 spring shows he's slipping. And while Chauncey isn't a Chris Paul-style PG, he's adept at understanding the whole floor in terms of something other than himself -- which, unfortunately, is the defining feature of Iverson as a distributor. â†µ
â†µ
â†µI also don't think for a second that, in sacrificing flexibility, the Nuggets really screwed up. True, 'Melo signed one of those old-fashioned max deals, that keeps him at the mercy of the team through 2010-2011. Technically; he still could demand a trade. But here's the point: While 'Melo/Billups/J.R./Martin/Nene isn't winning a title, it gives Denver a far more functional, encouraging team. One that won't win and lose in ways that defy logic. It's a real basketball team. And from Anthony's standpoint, well, what do you think he'd rather do: Get to give this new, improved template a try, or suffer through rebuilding? The latter seems like a good bet for some very public grumbling. â†µ
â†µ
â†µFinally -- and this might be me letting personal bias cloud my oh-so-rational analysis -- this is J.R. Smith's time to explode. He's been a headcase, a problem child, and insanely inconsistent. But now, even John Freakin' Hollinger thinks the man is headed for great things. Smith is tall, unspeakably athletic, and has T-Mac-like range. He's also learned to handle the ball responsibly, and even occasionally play defense. Basically, the perfect complement to 'Melo's mid-range musings, as opposed to Iverson, who often seemed to crowd out Anthony's comfort zone. â†µ
â†µ
â†µSmith might be the key to this deal; if Smith finally fulfills his potential, the Nuggets will be respectable in the West. As cool as having Iverson jerseys for sale was, I think that's one outcome Nuggets fans would certainly find refreshing.â†µ