Share All sharing options for: Marbury Situation Is Unnecessarily Complicated 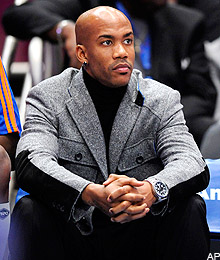 I'm not sure if Marbury is actually proving to be a distraction for the D'Antoni Knicks, aside from those fans (facetiously?) chanting for Steph to get meaningless minutes. As an aside, the culture of the fans has to change with the culture of the team, not sit there and wait to be unflappably convinced that things are different. It's called not being an utterly cynical, spoiled ass. â†µ
â†µ
â†µI also don't see what's so complicated about Steph's situation. The coach doesn't want him around. The team needs the cap space he represents. They could buy him out. They don't want to trade him unless they get back the same expiring money. This type of thing happens every day, or month, at least. So why is Billy Hunter, head of the NBA Players Union, now getting involved? From Bloomberg.com: â†µ

â†µâ‡¥"We may be engaging the team in trying to see if there's some kind of mutually beneficial position that the parties can arrive at," Hunter said in a telephone interview. "Maybe there's somebody willing to trade for him. Maybe you can do a buyout. It depends on the parties." â†µ

â†µAgain, what am I missing? Knight goes on to call the coach's decisions "sacrosanct," while also stressing that Marbury "isn't inclined to accept 80 cents on the dollar." Okay, that's great. But dude holds absolutely no cards here. The downside of having a gigantic guaranteed contract is that, when it's about to expire, you can be better off to the team dead, or on ice, than alive. I guess it would be nice of the Knicks to waive him, but then some other team gets him. Do they really owe him that? Is it in the Constitution? â†µ
â†µ
â†µAll I know is that Eddy Curry's reputation improves hourly, as long as Steph keeps commanding attention for his pissiness and Curry stays (relatively) quiet. He might even have a career after this.â†µ