Mercenary Pirates of the SEC

Share All sharing options for: Mercenary Pirates of the SEC 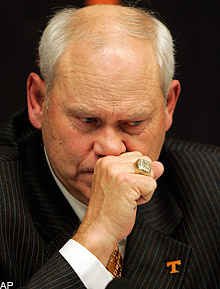 The ouster of Phillip Fulmer at Tennessee really does indicate the death of an era: The good ol' boy hiring system is dead, dead, dead. No longer does a coach need to be part of the family tree to be hired in what was the most good ol' boyish of conferences, the SEC. Not a single one of the current non-fired coaches in the Sexy Excellent Cash conference is an alum of the program, or even coached at the university prior to taking the job as head coach at the school. To the cynical eye, they are a collection of classic mercenaries riding the tide of cash washing through the conference, free agents without any homegrown loyalty for the school. â†µ

â†µThat is one way of looking at it, sure. Another is to say that more modern hiring practices have been forced on the schools by the competitive pressures within the league, and that SEC football teams now hire CEOs the same way Fortune 500 companies do: without concern for their prior affiliations, lack of attachment to the company, and with massive salaries. Tennessee in many ways represented the last holdout in the most corporate of conferences, a conservative, family-style organization swamped over the past seven years by LSU, Florida, Georgia and Alabama, all schools which looked outward for coaching help, not inward. â†µ

â†µTennessee is now going to throw itself around like a divorcee who married at 21, and it's going to be awkward. She might date someone who won't work out, as Florida did before settling on Urban Meyer. She might date a flashy macho jerk like Jon Gruden now, who might prove to be too sophisticated and could just up and leave her at anytime for a newer, hotter lady. She might even take a chance on a hot but immature Lane Kiffin-type. If she's very lucky, she might just settle down with an aw-shucks small-town guy with a heart of gold like Georgia did with Mark Richt. â†µ

â†µâ‡¥This is a family. We live by that. That's something that he promised when he walked into my living room. â†µ

â†µEdit: you were a family. You are now, like every other team in the SEC, a corporation. Human Resources will be issuing a manual on new employee policies shortly.â†µ