T-Mac Looks to Go From Agony to Ecstasy

Share All sharing options for: T-Mac Looks to Go From Agony to Ecstasy 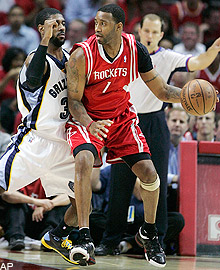 There are some players we want to see get a title because they're so well-liked. Others, we feel they need it to justify their careers. Usually, it's some combination of both. Kevin Garnett was tops on that list; he got his title. Allen Iverson is in a good position to make a run this season with Detroit. And then there's Tracy McGrady, whose retooled, Artest-ified Rockets are 3-0 and looking dead serious. The man himself is, as usual, dealing with injury issues, but he's still finding ways to contribute. â†µ
â†µ
â†µWhy did Garnett make that crazy speech? Because he knew how much that title meant to his legacy, his fans, and most of all, his self-image. That's why it resonated so strongly with McGrady, who temperament-wise couldn't be further from Garnett. From The Boston Globe: â†µ

â†µâ‡¥"I felt all of it. I felt every minute, every second of it, absolutely," said McGrady, whose teams have never advanced past the first round of the playoffs. "K is my man. We're both with Adidas and I'm around him a lot. We talk. I just know some of the things that he's been through. I'm kind of in those shoes. â†µâ‡¥
â†µâ‡¥
â†µâ‡¥"I can only imagine when that time comes. You take so much criticism through the years. It's your fault. But when your time finally comes and you shut everybody up, it's your time. You let the emotions out." â†µ

â†µAll three have faced criticism over the years, which supposedly explained their inability to win the big one. Garnett was too unselfish; Iverson's not a team player; T-Mac not a closer. There's some truth to all of those. But while Garnett and Iverson are no-brainer Hall of Famers, McGrady's the one who needs a title most. Fans of Garnett saw it as a cruel joke that he couldn't get one measly ring; to a lesser degree, the same is true for Iverson's supporters. With McGrady, a title would raise him up a level. The other two superstars were/are frustrating paradoxes; we'd all like to see T-Mac win, but in a weird way, it's only if he gets a championship that we'll really feel he deserved it.â†µ