But What Will All the Rich Baseball Players Do Under Obama's New Tax Plan?

Share All sharing options for: But What Will All the Rich Baseball Players Do Under Obama's New Tax Plan? 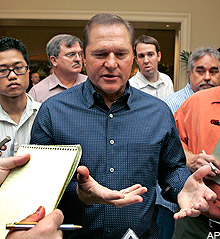 Think what you will about our new President-Elect Barack Obama, but this cannot be disputed: The man has pledged to allow the Bush income tax cuts on families making more than $250,000 expire, and give a tax cut to those earning under $200,000. That much we can agree on because that much is fact. â†µ

â†µWe can also agree on this: Major League Baseball agents are greediest people on earth. And as such, they are already trying to figure out ways around Obama’s tax plan to ensure more money for their multi-millionaire clients. Of course, this is their job, but this also makes us hate them even more: â†µ

â†µâ‡¥Agent Scott Boras, negotiating eight- and possibly nine-figure deals for free agents Manny Ramirez and Mark Teixeira, already has thought about the possibility of asking for larger signing bonuses payable this year in some of his contracts. â†µâ‡¥

â†µâ‡¥"There's some consideration to be had with the impact of the election," he said. â†µâ‡¥

â†µâ‡¥Free agents can't start negotiating money with all teams until Nov. 14. Only a relatively small percentage of contracts are finalized before Jan. 1. â†µâ‡¥

â†µScott Boras negotiating at Yankee Stadium later this month: "Alright, Mr. Cashman, Manny is all yours if you’ll agree to this six-year, $160 million contract. And we’d like you to double that signing bonus you gave A-Rod. So that’s a $20 mil for the bonus, mkay? Oh, oh, and I almost forgot: We’re gonna need a check for that 20-large signed and dated before January 1, not spread out over five years like you did with Alex. Hey man, don’t blame me, alright. Not the bad guy here. Blame Obama. His tax plan could cost Manny 400 grand if we don’t get this bonus before ’09. That’s the money he’s already planned on using to install that diamond-incrusted, solid gold clawfoot bathtub in his butler’s guest house. I’m just trying to ensure my client has the basic amenities to survive, alright pal."â†µ