Share All sharing options for: Case Studies in Student-Athlete Behavior 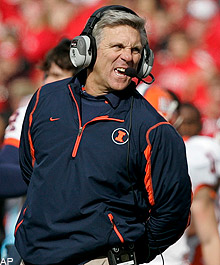 Example One of Divergent Standards of Student-Athlete Behavior: Illinois. Where can you punch someone in the jaw, break said jaw, and not go to jail for it? On a football team, of course. â†µ

â†µIllinois football players Mikel LeShoure and Jeff Cumberland got into a fight. One of them left with an intact mandible, and one did not. Despite breaking LeShoure's jaw, Cumberland will play against Western Michigan because according to coach Ron Zook, it is "a family affair." â†µ

â†µâ‡¥"I try to treat these guys like my own kids and like I'd want my own children dealt with," Zook said. "Do we have some issues occasionally, like everyone else? Absolutely. Every situation is different." â†µ

â†µThey are indeed. If you break someone's jaw anywhere else, you're arrested and charged with assault. Do it with a teammate, and it's a "family affair." â†µ

â†µExample Two of Divergent Standards of Student-Athlete Behavior: Michigan State. If Zook seems a bit too lax for your tastes, consider the case of Mark Dantonio, the Michigan State coach who benched offensive lineman Joel Foreman because he didn't wear a tie on the pregame Spartan Walk last weekend. Ties are required for the pregame ritual, and for Foreman the decision to go for a more business casual look cost him a start. Next time, you bring your double Windsor, or you don't get snaps, son. â†µ

â†µ(Questions remain, though: what about a bowtie, coach? I would count that as "a tie," but stop short of approving the bolo tie. The only person to ever wear a bolo tie and get away with it is Montana governor Brian Schweitzer, who even wears them while performing important cowboy chemistry experiments.) â†µ