Misunderstanding Larionov and the KHL

Share All sharing options for: Misunderstanding Larionov and the KHL 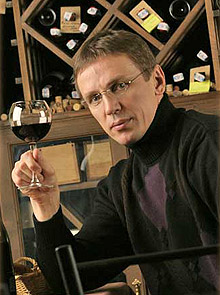 Over at The Hockey News yesterday, Ken Campbell wrote a short notebook item about Igor Larionov and the Kontinental Hockey League that has to be read to be believed. â†µ

â†µâ‡¥Larionov was always all about principle. Instead of defecting from Russia to play in the NHL in his prime, he bided his time and went through the proper channels before coming to the NHL. Once he got here, he proved to be a great teammate and person and was part of the success of several teams along the way. â†µâ‡¥

â†µâ‡¥Now he's working with a man who has no respect for the sanctity of a contract, as evidenced by the KHL's poaching of Pavel Valentenko and Matt Murley recently by teams in Russia. Despite being under contract to NHL teams and Medvedev agreeing to a mutual respect of contracts, his league continues to allow players to flout the rules. â†µâ‡¥

â†µFirst off, I'm happy to agree with Campbell on a single point: Like him, I believe Larionov is one of the classiest professionals in the international game. â†µ

â†µBut in reading the above passage, one could get the impression that getting permission to leave the Soviet Union during the Cold War to play in the NHL was simply a matter of talking to the right people and getting the right documents signed -- sort of like having to deal with INS here in the U.S. if you want a green card. â†µ

â†µOf course, it wasn't that way at all. If it had been, you can bet your last ruble that Vladislav Tretiak would have been on the first Aeroflot flight from Moscow to Montreal after Ken Dryden retired to take Dryden's place playing for the bleu, blanc et rouge. â†µ

â†µYou see, Larionov didn't come to the West to play hockey until the Soviet government under Mikhail Gorbachev decided it would let him. Before that time in the late 1980s, the only choice any hockey player behind the Iron Curtain had was to defect. â†µ

â†µWhat's worse, it's easy to infer from that paragraph that Campbell believes that hockey players who were stuck behind the Iron Curtain and decided to defect -- Russian players like Sergei Fedorov and Alexander Mogilny, not to mention countless Czech and Slovak players like the Stastny brothers and Peter Bondra -- were somehow less than honorable when they defected to the West and left their families to the tender mercies of communist authorities. â†µ

â†µAs for Campbell's disbelief that an honorable man like Larionov would work with Medvedev, a man who doesn't think much about the contractual obligations of anyone signed to play in North America, that conclusion strains credulity too. After all, absent an updated player transfer agreement between the NHL and the Russian Hockey Federation, there isn't a single NHL contract that could be found to be enforceable in a Russian court. â†µ

â†µWhat's worse, Campbell seems to have a tough time reconciling that despite the fact that Larionov is honorable, he's signed on with an organization, the KHL, that's designed from the ground up to compete with North American hockey. In a series of conversations I had with Russian hockey officials earlier this year, they made it clear to me that the KHL was established, in part, to help rebuild the Russian hockey development system and encourage Russian players to stay home and play in the KHL instead of ride the bus in North America's minor leagues. And as I argued in this space just yesterday, that's looking like a more and more attractive alternative to Russian prospects every day. â†µ

â†µSo, like it or not, Larionov is as honorable a character as he's ever been. The mental hurdle that Campbell and others must surmount is to realize that he's not on the same side as he was before. Whether or not you conclude that choice makes him your enemy is another question entirely. â†µ