It'd Be Hard to Blame Ellis for Demanding a Trade, Should it Come to That in Golden State

Share All sharing options for: It'd Be Hard to Blame Ellis for Demanding a Trade, Should it Come to That in Golden State 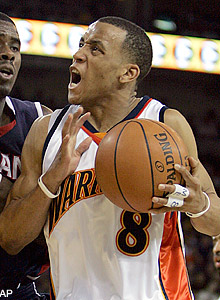 A few weeks back, I suggested the Golden State Warriors make their peace with Monta Ellis's low-speed transgressions, lest they do irrevocable damage to that relationship. Well guess what? It looks like they didn't listen, and have started to open up fissures in what should be the foundation of any strong team.
â†µ
â†µEllis has accepted his punishment, but is not pleased that the team refuses to take the nuclear option off the table: That after all the fines and suspension, his deal could still be voided. Frankly, it shows a lack of respect for someone who's admitted he let his employer down and was willing to pay the price. From Tim Kawakami: â†µ

â†µâ‡¥The real murmurings around the league: If Warriors colossus Robert Rowell isn't careful, Ellis could eventually decide to make his own judgement. The real decision to watch: Ellis could decide that he wants nothing more to do with the team, whether they decide to void his contract or not.
â†µâ‡¥
â†µâ‡¥If he feels his recovery is coming along, Ellis could say by mid-December: Either void my deal or trade me, your choice, because I'm never playing for a franchise that would do this to me after I admitted my mistake and was ready to accept singular punishment. â†µ

â†µKawakami strongly hints that Memphis would take on Monta right away, and, glut of guards aside, be more than willing to make him the new focus of their franchise. You could argue that Ellis signed a deal and has to abide by it, that demanding a trade is unfair and bratty. But this "double jeopardy" set-up Rowell's insisting on is really the first stone cast here; it's the move that seems flat-out draconian, out to prove a point and show a player who's boss after having already once done so. In fact, while I usually hate trade demands, if the owner welcomes you with the keys to the future and then completely disses you, why wouldn't you reconsider?
â†µ
â†µAthletes may occasionally display terrible judgment and let agents and egos do guide their decisions. And yes, stars too need to fall in line. Even on the Warriors, I guess. But here, Rowell's arguably showing us exactly how owners shouldn't behave -- petty, megalomaniacal, and incapable of seeing that in a players' league, you work with your franchise stud, not against him.â†µ