Share All sharing options for: Jogging Is Dangerous, Causes Rabies 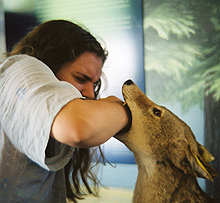 When jogging was invented in the mid-70’s, I don’t think the architects of this suburbanite physical activity realized the dangers involved, aside from boredom and the occasional shin splint. But please believe; jogging is no walk in the park. For starters, you’re moving a whole two-to-three MPH faster. And on top of that, you have freakin’ rabid animals jumping out of the woodwork: â†µ

â†µâ‡¥Authorities in Arizona say a jogger attacked by a rabid fox ran a mile with the animal's jaws clamped on her arm and then drove herself to a hospital. The Yavapai County sheriff's office said the woman told deputies she was on a trail near Prescott on Monday when the fox attacked and bit her foot. â†µâ‡¥

â†µâ‡¥She said she grabbed the fox by the neck when it went for her leg but it bit her arm. â†µâ‡¥

â†µâ‡¥The woman wanted the animal tested for rabies so she ran a mile to her car with the fox still biting her arm, then pried it off and tossed it in her trunk and drove to the Prescott hospital. â†µâ‡¥

â†µNow this is why I stick to running in the comfort of my own basement, on the treadmill. Watching DVR’ed episodes of The Office while working out is much more interesting than stupid nature. Plus, the only danger involved is not hearing my mom yell down that my dinner is getting cold. See what I did there? Because I’m a blogger. Which means I live in my parents' basement. â†µ