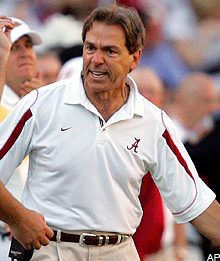 Les Miles cares not about his players and his team ... no, he's looking out for all of humanity, dear reader. He sees a dark presence among us, and according to one of his former recruits, its name is Nick Satan. Umm, Saban. â†µ

â†µâ‡¥Davis, a sophomore defensive end from West Monroe who switched his commitment to first-year Alabama coach Nick Saban in 2007, said Tuesday night that Miles reacted to his flip-flop by saying, "The devil has come back to college football and is trying to create a big buzz." â†µ

â†µMiles denies this, but confusing Satan and Saban is easy. The names are only a letter off, both wear red and are very well-dressed, and both are successful businessmen who thrive on getting people to sign on the dotted line and do their bidding. There are differences, of course: one is pure evil, and the other is only considered evil by any fan of a team who's had to face a third and long against his defenses. (And possibly LSU and Miami Dolphins fans.) â†µ

â†µThis is primo chatter leading up to unbeaten Alabama coming into LSU on Saturday, the first time Saban has returned to Baton Rouge as the head of the Crimson Tide. They're not doing anything like taking out whole billboards for the occasion. Nope. Nothing of the sort. â†µ