Share All sharing options for: Joey Porter's Best Week Ever Marches On 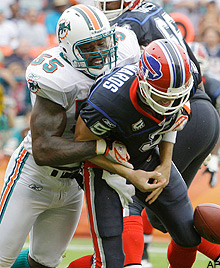 Joey Porter is having a banner week ... and it's only Thursday. First, he earned Colorado State a 15-yard penalty after giving their running back a celebratory chest bump in the endzone on Saturday (see video), then he got in a pissing match with Broncos receiver Brandon Marshall over which of them is “soft” and which has “popcorn muscles.” Now, we have this from “Peezy,” in reference to Jags receiver Matt Jones: â†µ

â†µâ‡¥"I'm still trying to figure out how a guy who gets caught with cocaine in his car and he still plays the game and nothing happens to him ... and he had no penalty or nothing. â†µâ‡¥

â†µâ‡¥"I'm still tying to figure that out ... he got caught with cocaine in his car and Matt Jones is still up there playing football ... I can't figure how you get away with that and you fine people $20,000 for making a comment about the media, refs, saying how they feel, yet this is about a guy getting caught with cocaine and nothing happened ..." â†µâ‡¥

â†µI know this is really complicated, Peezy, and you’re really smart and all, so let us help you “figure that out.” See, Jones was suspended by the NFL for three games. It happened just about two weeks ago, in fact. But Jones decided to appeal the penalty. Thus, while the appeal is pending, he is allowed to participate in football games. Although we do understand your need to talk trash about a peer at least twice a week and there are only so many players in the NFL -- sometimes you must stretch the truth. â†µ

â†µBut yeah, if you would still like to consider the suspension and subsequent appeal as “nothing happened,” then we whole-heartedly agree with you, Mr. Porter. Please, sir, we did not mean to question your judgment and would never consider your muscles to be constructed of popcorn. If you’re still upset over this matter, please visit Spencer Hall at 666 Immagetmahasswhooped Lane; Atlanta, GA 30307. He can answer any lingering questions you may have. â†µ