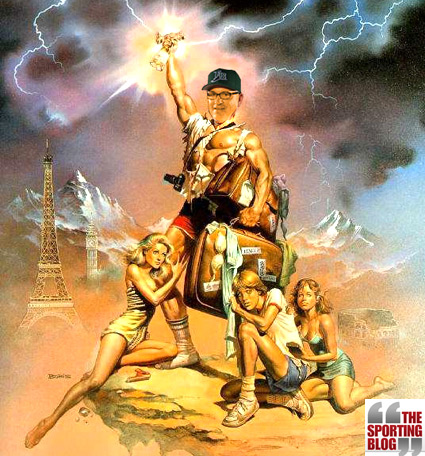 â†µ
â†µCue “Holiday Road”: Rays manager Joe Maddon is taking some time off for a 10-day European Vacation with his new bride. Contrary to the way you and I might think, his main goal isn’t to tour the Coliseum in Rome or drink absinthe in Prague or do whatever it is people do in Germany. No, he simply wants to see some Tampa Bay merchandise over there: â†µ

â†µâ‡¥"My main objective is to see someone wearing Rays gear in either Italy, the Czech Republic or Germany. If I see that, I shall take a photograph." â†µ

â†µAnd if Joe sees that, I shall be amazed. I’ve never seen anyone here in good ol’ US of A wearing Rays gear, let alone some kid in Stuttgart. Although, if they got Jay-Z to rock a Rays fitted, it would blow up overseas. I saw more Yankees hats during my time in Europe than I’ve ever seen in New York City. I also saw a man selling marijuana, cocaine, ecstasy and mushrooms all at the same time. They have no respect for division of labor over there. Marxists.â†µ