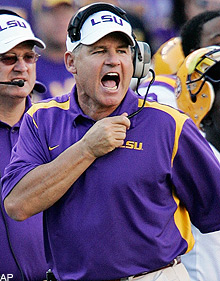 Les Miles is busy. He has a football team to run, a family to provide for, and shiny white hats to wear. (Only the sparkliest: most of Miles' hats are used as landing beacons by approaching pilots at Baton Rouge's airport.) â†µ

â†µHe also doesn't read, but if he did, he's pretty sure game film would be just like a book. â†µ

â†µâ‡¥Q: With all the potential distraction, will you pretty much be happy when this week is over with? â†µâ‡¥
â†µâ‡¥
â†µâ‡¥A: “I have to be real honest with you. I enjoy game week. I enjoy practice. I enjoy preparing. I want you to know something. When I wake up in the morning and I turn that film on, it’s like reading a book, and it’s exciting ... I don’t read books, but if I read books, it would be like reading a book. â†µ

â†µIn other news, LSU's Jarrett Lee continues to make reading film/watching books painful for Miles. It's not just that Lee's thrown 10 interceptions thus far as a freshman, but that he has a knack for throwing them the other way for points. Of the 10 picks he has thrown this year, five of them have been returned for points. â†µ