Marbury's Taking His Game Back to High School

Share All sharing options for: Marbury's Taking His Game Back to High School 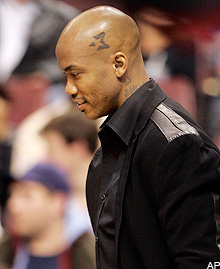 Via BDL, the Daily News has some truly bizarre news about how Marbury's decided to spend his time inactive: â†µ

â†µâ‡¥"I think I'm going to start practicing with my high school team," Marbury said after practice Thursday in Greenburgh. "Seriously. I've already called the coach to see if I can run up and down with the guys and at the same time help teach the younger guys the NBA game." â†µ

â†µOne of those "do I laugh or do I cry" Marbury moments, right? Then you remember that phenom Lance Stephenson is on Lincoln, which makes you wonder why coach Dwyane Morton's considering the idea. I mean, it would be cool, and probably somewhat helpful, for these kids to see Marbury up-close. But corrupting Stephenson is a major concern. I'm serious. That's how unstable an isotope Steph is these days. â†µ
â†µ
â†µThis also reminds me of when Larry Brown, freshly deposed from the Knicks, was rumored to have his coaching jones going so hard that he planned to start working with high school teams. This stuff makes you feel sorry for guys who obviously can't live without the game, but it's they're own damn fault that they've been reduced to this. Also, it's hard to tell if these are desperate acts, or something Marbury or Brown is doing because they've finally got some time; LB, for his part, often talked about going to coach that low on the food chain. Unfortunately, when it's more exile than altruism, and someone like Marbury rolls up with the entire New York press corps wondering just what it all means, it seems like this couldn't be a purifying, back-to-my-roots sojourn even if he wanted it to.â†µ