Share All sharing options for: Sergio Rodriguez Wants to Start Over Elsewhere 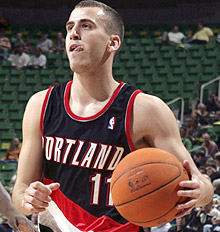 This another one of those "translated by HoopsHype items," so I'm putting my trust in them here. No surprise now when an international player airs his grievances in the foreign press. From Marco.com, here's Blazers's PG Sergio Rodriguez, a.k.a. "Spanish Chocolate," a.k.a. not Rudy Fernandez, demanding a trade through his agent, Javier Ortiz: â†µ

â†µâ‡¥"(Sergio) is frustrated because of an anomalous situation. That proves the best thing for the Blazers, for McMillan and for Sergio is that he gets traded to a team where he's going to be treated in a more natural manner. When he tries things with the young guys that don't play much, it's never with Sergio," Ortiz says. "McMillan doesn't like Sergio. He has no confidence in him. Any excuse is good to send him to the bench. For the player, it's impossible to have any confidence because in three years, he has never known before games what his role was going to be, how much or when he was going to play, if at all." â†µ

â†µIt's hard to argue with this logic. The Blazers have been looking for a point guard since their renaissance began, and yet Sergio's never found himself a steady spot in the rotation. This despite being prized by GM Kevin Pritchard, and viewed around the league as someone who can, at the very least, get things moving in astounding fashion. Of course, that might be part of the problem. Here's Oritz again: â†µ â†µ

â†µâ‡¥"Sergio is who he is. He could improve his shot, his defense and physically -- and he did that. What he can never be is a halfcourt point guard. He just wants a chance to start from scratch." â†µ

â†µSo there you have it. I can understand why, between the poor fit, mixed signals, and still-positive rep elsewhere, Rodriguez wouldn't want to salvage his career. You could argue that he's still young, and should wait it out, but he's been patient up to this point. The question is, what does super-rookie Fernandez have to do with this? Well, for one, seeing Rudy immediately step in and play a prominent role can't be making Sergio feel good. Granted, there'd be more asked of Rodriguez, but Rudy has basically been allowed to hit the ground running. On the other hand, you have to wonder how the point guard's departure would affect Fernandez. Just saying, as a first-year player from a foreign land, it must be nice to have a fellow countryman around. â†µ
â†µ
â†µOr who knows, maybe Sergio is a total downer, and Rudy's sick of feeling wedded to him. Rodriguez whines about the team and drags him down, while Fernandez just wants to go get sodas with winners like Brandon Roy and LaMarcus Aldridge.â†µ