Share All sharing options for: Filler: D-Wade says what LeBron is probably thinking 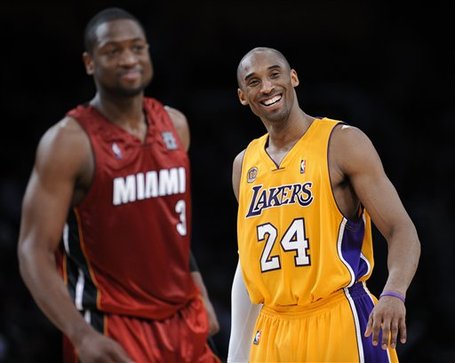 Dwyane Wade told the Associated Press something pretty interesting the other day: that he will only stay with the team as long they are competitive. "I'm going to listen. I owe the Miami Heat that much. I'm going to listen to what they have to say and I'm going to think about it. But right now, the way I feel, I want to make sure that we're on track to where I want us to be on track to before I sign back."

Wade, who is of course a free agent in 2010, single-handedly carried an atrocious Heat roster to a 43-win season last year. And now it appears that the strain of doing everything himself, when only three years ago his Heat won the NBA Finals, has gotten old fast.

It's not surprising that Wade would be interested in exercising his free agency. Even if he chooses to re-sign with the Heat, there is a great chance that he will opt out of the final year of his contract anyway, so to get more money. But to actually go the Kobe Bryant route: either get me better players or I'm gone, is a little startling. For one thing, most of the major free agents have already signed with other teams -- maybe if the Heat knew that Wade wasn't opposed to leaving town, they might not have passed up so many of the big names.

It is also worth noting that as devoid of talent as the Heat roster is (Wade averaged 16.3 more per game than their next highest scorer), they are actually over the salary cap. Mark Blount and Udonis Haslem are worth a combined $15 million, while Jermaine O'Neal, beset by years and years of injuries, is making a whopping $22.9 million -- more than every other player besides Tracy McGrady and Kobe Bryant.

Look for the Heat to add someone notable in the coming weeks -- because their current roster is a train wreck, and nowhere near title-contending. If, heaven forbid, Wade got injured, it would be a repeat of 2008, when they had the worst record in the NBA.