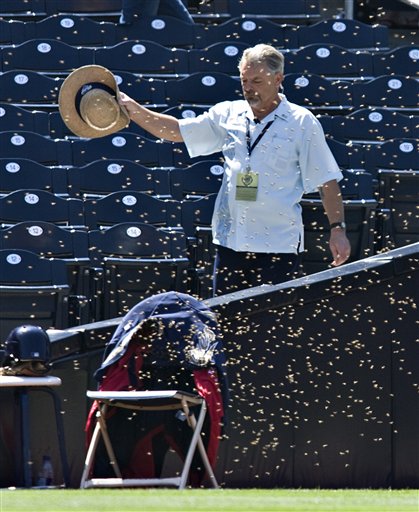 Yesterday's Astros-Padres baseball game was delayed a whopping 52 minutes... because of bees. The players cleared the area when the insects starting to swarm left field, and then settled on the back of a jacket that the ballgirl had been wearing. By the time a beekeeper showed up, the jacket was completely layered with bees.

It is without a doubt one of the most bizarre things to happen at a baseball game. Even more bizarre was why a few thousand bees were pulled out of nature and onto the sports field. The queen bee had settled on the jacket, and her minions had followed, but the jacket's manufacturer, Majestic, wanted to put any fears of future bee swarms to rest.

"To our knowledge this is the first time that bees have swarmed Majestic on-field MLB apparel," Majestic said in a statement. "We can only guess that the bees are attracted as Major League players to the warmth and comfort of our performance fabrics.

"However, players and fans should rest assured that our product testing has shown no risk from swarming bees. We regret the inconvenience and Majestic will be providing the affected ballgirl a replacement jacket shortly."

On the bright side, Albert Einstein said that the bees are an integral part of the environment, and that we cannot function without them. They have been dying off lately, but at least they are still alive enough to interrupt Padres games.