Filler: Kobe stays put; so much for playing overseas

Share All sharing options for: Filler: Kobe stays put; so much for playing overseas 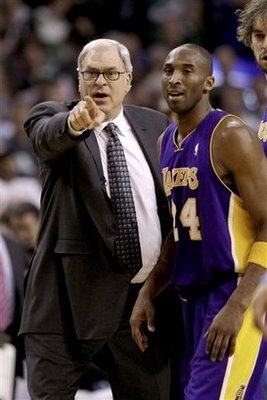 The Los Angeles Times is reporting that Kobe Bryant will not opt out of the final two years of his contract and will instead sign a three-year extension with the champion L.A. Lakers.

It's not surprising that Kobe would stay in Los Angeles. But the fact that he didn't opt out, to at least test the waters and see if maybe he could get a little more, is indicative of how bad the economy is. Last year, there was a considerable buzz that LeBron James and Kobe Bryant could possibly play in Europe in 2010 and 2011. A couple foreign teams expressed serious interest in the league's two biggest stars; the Greek team Olympiacos said they would offer LeBron a two-year, $100 million deal when the time came.

Considering how strong the Euro was, how weak the dollar was, how foreign teams without a salary cap could offer twice as much money as an NBA team, and that teams such as the Olympiacos played in countries where their contract would be tax-free, many feared that the league's top stars could be bolting for Europe. Sources close to James said he would be interested in playing overseas, while Bryant said that he definitely was. "Do you know any reasonable person that would turn down 50 [million dollars]?" he told the Boston Globe.

But the global economy is much different from where it was a year ago. The nations of the teams capable of giving those two the cash, Greece and Russia, are now struggling economically. Greece is close to slipping into a recession, while Russia, who is suffering heavily from a lesser demand in oil, is already in one. In other words, that $100 million deal isn't coming any time soon, and now that Kobe is staying put for several more years, there's almost no chance that LeBron will be playing in Moscow in 2010. David Stern can sleep a little easier tonight.