Filler: The Warriors need to bite the bullet on Curry

Share All sharing options for: Filler: The Warriors need to bite the bullet on Curry 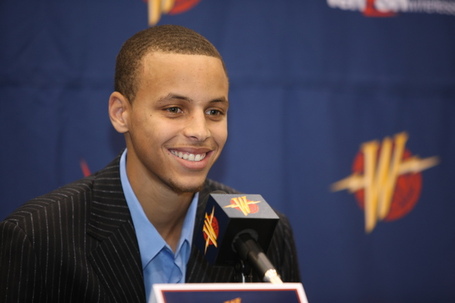 In an already hectic NBA arms race, the Cavs have added Shaq, the Magic have added Carter, the Celtics have added Rasheed, and the Lakers, it now appears, are going to add Ron Artest. Teams around the league are getting significantly better, and the Warriors have the opportunity to be one of them. They have the opportunity to add perennial All-Star Amare Stoudemire to their team, via a trade with the Pheonix Suns, without giving up Monta Ellis, Stephen Jackson, or Corey Maggette.

This is the epitome of a bad management, which the Warriors assuredly have; they're hesitant to make moves when they should, and they're quick to hand fat contracts to people who don't deserve it. Somehow, the same team that gave Troy Murphy, Derek Fisher, and Mike Dunleavy max contracts was reluctant to give Baron Davis, the face of their team, $65 million. But they were more than willing to give that cash to Andris Biedrins, and then $50 million to Corey Maggette.

Golden State doesn't need Curry -- they already have a good rotation of guards and small forwards in Ellis, Jackson, Azubuike, and Maggette; they certainly don't need Belinelli, not when they have Anthony Morrow, who did more in less playing time than Marco has done in two years; they don't need Brandon Wright, not when they have another good-looking, left-handed, up-and-comer in Anthony Randolph; and if they can get Amare Stoudemire, they sure as hell don't need Biedrins -- Ronny Turiaf, who makes more than four times less money than Biedrins, can take his place.

The Warriors need to realize that they are never going to go anywhere as long as they continue to trot out 6'5 guys to play power forward -- not when the Lakers have the dominant front court of Artest, Gasol, and Bynum. Even if Stephen Curry becomes exactly as good a player as Baron Davis -- which isn't going to happen -- this team still isn't a contender. They would have three great perimeter players and nothing else down low -- they'd be the same damn team they were two years ago, when they missed the playoffs.

I don't understand how coaches and GM's think. I don't understand why the Warriors would rather keep a player who may be good one day, when they can get a player who is great, today, and they wouldn't have to give up that much. If they don't make the trade, they are just going to remain the way they are now, since they have pretty much run out of cap room. And even if Amare was to leave after one season, which is of course the fear, it would free up a lot of cap room.

In the NBA, you don't win with marginal players at your position -- you win with great players. Next season, Golden State can either pay big money to Amare Stoudemire, who is worth it, or they can give that money to Andris Biedrins, who is a pretty good player, but he's no Amare. This isn't the time to be hesitant. Steve Kerr knows that Amare is gone in a year, and he's looking to sell him off while he still can. The Warriors have the chance to steal the best big man suited for Don Nelson's up-and-down, play-no-defense style of ball.

I know it's tough to give away a promising rookie, but if they don't get Amare, they will remain in the dreaded purgatory of the NBA: good enough to just make the playoffs, but not bad enough to get a high draft pick. The best teams always win, and they have a chance to be one of them. If they don't get him, this team is going nowhere. And Andris Biedrins and Brandon Wright and Marco Belinelli will be along for the ride.