Share All sharing options for: C-Webb: A.I. Plays Better With Robots, Should Be Detroit's Sixth Man 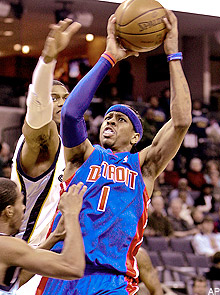 The ongoing issue in Detroit: What to do with three guards, all of whom deserve to start. Two of them, Rip Hamilton and Allen Iverson, are stars that probably never thought they'd come off the bench. The third, Rodney Stuckey, looks like the future of the Pistons, and has proven himself more than capable of keeping up with his elders. Attempts at small ball were less than successful, and finally, Coach Curry caved to common sense (or, manned up), and decided to bring Rip in as a reserve. â†µ
â†µ
â†µChris Webber, a former Piston and erstwhile Iverson teammate, had a different take on the matter. From the Journal-Sentinel: â†µ

â†µâ‡¥"Allen is the best player I've seen with four stiffs, and that's no disrespect to anyone," Webber said. â†µâ‡¥
â†µâ‡¥
â†µâ‡¥At another point during his guest spot on "Inside the NBA," Webber said, "Allen Iverson needs five robots to play with him." â†µ

â†µWebber made it clear that he was referring to the 2000-01 Sixers, when Iveron "had five guys who couldn't score. Aaron McKie, (Dikembe) Mutombo, (Eric) Snow, all defensive players." But am I the only person who thought Webber was speaking from personal experience? He was brought to Philly to serve as a much-needed second option, and instead, went into steep decline. C-Webb may know this from watching Iverson from afar, and yet his own time with Philly -- when they were neither great nor terrible -- is perhaps the best evidence for his argument. â†µ
â†µ
â†µFor his part, Iverson laughed before saying all the right things: "Listen man, I haven't ever thought Chris had it all, anyway. It don't matter man, I do whatever is going to make the team better." You also have to wonder if he wasn't just as amused by Webber calling other former Sixers "stiffs" and "robots."â†µ