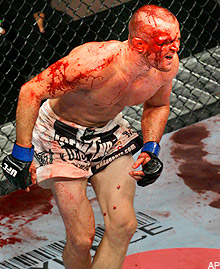 When you’re the CEO of an up-and-coming brand, it’s important to remain modest, even in the face of early, successful returns for your product. Thus is the case with UFC president Dana White, who isn’t setting his expectations for MMA too high: â†µ

â†µSee how humble? He only limited his sport’s takeover to this world. There’s still an entire universe out there to concur. Who knows what crazy lame sports they play on Mars that the UFC will someday put in a cross-grip choke hold and asphyxiate into submission. â†µ

â†µWhite also makes a valid point with regards to humans relating to fighting. As animals, it’s certainly part of our basic make-up. Also in our basic DNA: Clubbing women and dragging them back to our caves; eating raw Mastodon meat straight off the carcass; and walking on all fours. This isn’t to say that MMA fighters/fans are cavemen ... the latter only beat each other to a pulp over territorial disputes, not merely for money. Of course, I can enjoy the occasional ear-explosion as much as the next guy, but I don’t see the sport ever even sniffing the popularity of American football, let alone soccer. Modern humans enjoy some element of team participation and advanced strategy. Boxing, however, could be in trouble. â†µ