Share All sharing options for: Assisted Suicide With Chris Paul

Note: I published this back in August, but SBNation.com didn't exist yet, and we weren't previewing the Southwest Division, which features Chris Paul. And because I'm never going to be able to look at Chris Paul without thinking of Krispy Kreme donuts, I figure it's worth re-printing below:

Well I guess you could call it participatory journalism. Like when George Plimpton wrote Paper Lion. Or some terrible Rick Reilly column that’s probably happened 15 different times already. By living like the pros, we gain insight. Isn’t that right? At the very least, this serves as a convenient rationale for anyone looking to go to a strip club with three hundred bucks worth of one dollar bills.

But enough digression. Yesterday afternoon, because NBC was showing some female triathlon, ABC was showing an LPGA event, and CBS had a golf tournament full of Country Club golf semi-pros, I got bored and decided to make Chris Paul’s Krispy Kreme Bread Pudding.

Some background: earlier this summer I met Steve Kostorowski, and as I explained earlier, he nearly killed me. In a good way, I suppose. But in addition to devising workouts for the athletically handicapped (me), he’s also a personal trainer for professional athletes like Stephen Curry, Jack McClinton, and, most prominently, the best point guard on the face of the earth, Chris Paul.

And sometime last week, I heard through the grapevine about his struggles in fine tuning Paul’s diet. After checking with Steve, I found out exactly what we were talking about: CP’s favorite dessert, a bread pudding made from 24 Krispy Kreme donuts, among other diabetic fodder. 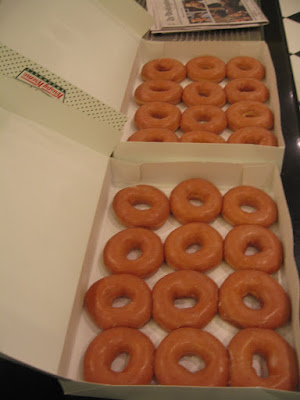 Good God. This I had to see for myself. So, with a little investigation, I tracked down his personal chef, New Orleans’ Patrick Henry, and found the recipe. Yesterday was a pretty disgusting day in DC—alternately rainy and muggy. It somehow combined the worst qualities of both rainy and hot days. Coupled with my atrocious programming options and the collective hangover of my social network, the prospects for a fulfilling day were doomed from the start.

What better way to break the malaise than to bake a 15,000 calories dessert? This is what the best point guard in the NBA eats:

Now, some nutritional perspective: one Krispy Kreme donut (pdf) has approximately 20% of your daily fat allowance (18 g), along with a tidy 200 calories. Not bad. Then again, since we're talking about using 24 fucking donuts, let's temper our rejoice. With the doughnuts alone, we’re talking about 4,800 calories, with an impressive 500% portion of your daily fat intake. 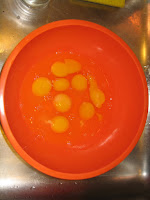 As for heavy cream, that stuff has got to be the most unhealthy food additive this side of crack cocaine. (At least crack boosts metabolism.) 1 Cup of heavy cream has about 820 calories along with 326 mg of cholesterol. So just in case the eggs and donuts hadn’t stabbed you in the fucking heart, the heavy cream delivers the kill shot quite nicely.

Without looking up the nutritional facts for chocolate chips and sugar, I think it’s safe to say we’re talking about a culinary product that had to have been conceived by the goddamn devil himself. Naturally, I expected it to be phenomenal. 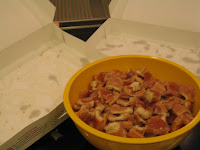 Creating this stuff presents a few obvious challenges. First of all, as Chris Rock outlined a few years ago, Krispy Kreme donuts may have traces of crack cocaine in them. None of us would be surprised. Tearing up 24 donuts into tiny pieces and not eating half of them is quite the exercise in restraint. Really, try it sometime. After tearing the donuts, I had to make the "egg mixture"--which was basically like conjuring a heart attack in a mixing bowl. Eggs, cream, a bunch of sugar, chocolate chips, some cinnammon, vanilla extract... The only things missing were vodka and nictotine. (Substitute patron where necessary if you're Lendale White).

Then, I threw it all in baking dish and stuck it in the oven for 45 minutes. When it emerged? Heaven. 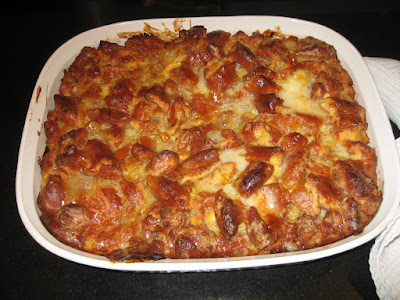 Looked like scalloped potatoes, tasted like cake mixed with pudding mixed with Eddy Curry's wet dream. Eating my first piece was one thing. But my friend spoke for everyone when he said, "Ah, it's pretty disturbing that I probably just ate six donuts and I want another piece." Like I said, the work of the goddamn devil.

All of which is to say I have yet another reason to wish I was a professional athlete. Chris Paul, much to his trainer's chagrin, eats this stuff regularly. He's able to do this and preserve his impressive physique, wake up the next morning without feeling like a house is in his stomach, and play basketball better than... oh, all but maybe three or four other human beings on the planet. Also, he has a chef that will make this for him whenever he wants, whereas I had to carve out two hours of my Sunday to get this done. Damnit.


Jealousy aside, and having completed the most lethargic exercise in participatory journalism since Peter King shadowed Gilbert Brown for a week (note: this probably never happened), I have to say: the bread pudding was damn good. A means for assisted suicide? Perhaps. But still a fun way to spend my Sunday afternoon. And more importantly, yet another example of the most frustrating lesson ever: professional athletes can do things with their bodies that other people can't. Whether that means dunking or eating Krispy Kreme bread pudding every day, they just can.

Only one question remains, then: can someone please pass the milk? 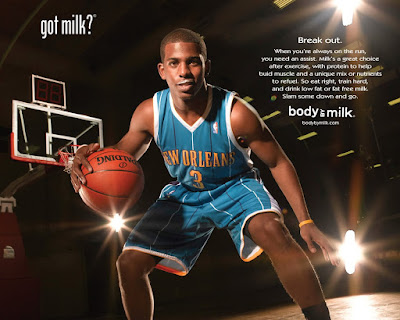 Fading Into the Sunset? Your 2009 NBA Southwest Divison Preview