Share All sharing options for: 4. Kobe Bryant Gets Better

Kobe Bryant reminds me of a few other great athletes in that he’s not likable in any sense of the word, but his career just forces you to appreciate his greatness. He works harder than anyone else in the NBA, and that’s not one of those empty platitudes that writers use to describe someone’s offseason. Really and truly, Kobe Bryant’s game has been carefully crafted through years of hard work, and whenever he gets the chance, he builds on what’s already made him so great.

He worked on his post game with Hakeem Olajuwon over the summer, and it’s already paying dividends. SB Nation’s Silver Screen and Roll elaborates:

Bryant’s increased post work has been deliberate — and extremely successful. His interaction with Olajuwon from the court makes that obvious, and Olajuwon’s comments after the game confirm that he sees Bryant as having successfully incorporated what The Dream taught him into his game. The complete helplessness of Shane Battier, the defender thought to be the best at defending Kobe Bryant, is the proof in the pudding.

And that’s just in the last couple of months. As good as Kobe already is in the post, and as quickly as he has already incorporated the moves Hakeem taught him into his arsenal, expect him still to continue to improve, as he continues to practice and use his new moves.

It’s only six games in, and the sample size is small, but every indication is that this major improvement in Kobe Bryant’s game is deliberate, real, and here to stay. That steady decline that was predicted for Kobe going into the season? Go ahead and put that on hold, for the time being, as Kobe appears to be heading in the opposite direction.

As Bryant gets older, it’s clear that he’s not going out with a whimper. And that means changing his game. As opposed to someone like Allen Iverson, Kobe’s got the size and skills to play just about however he wants, and that makes him a perfect candidate to be a dominant post player. And the scary part is, he’s just scratching the surface. As the years pass, he’ll continue to master the art, and with characteristic savvy, could wind up being one of the tougher post-up guards in history. 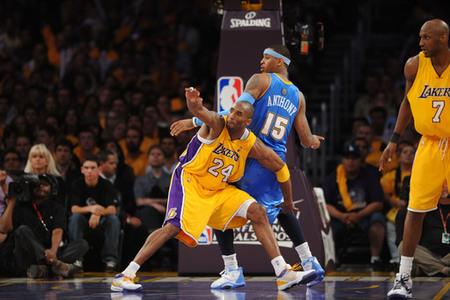 So, yeah, a guy that just recently decided he wants to master the post-up game could go down as one of the better post-up guards in history. He’s that good. Would you bet against Kobe being the best at anything? And with that said, he’s still completely unlikable.

(And speaking of great athletes that make me sick… Cudos to Curt Schilling for reminding me why I hate him so much, after he made his profile photo on Twitter a picture of his ankle from the bloody sock game. What an ass.)

(Also: Please Kobe, don’t teach any of this shit to Lebron.)