Share All sharing options for: Did The Charlotte Bobcats Just Become More Dysfunctional Than Golden State?

What’s that? Warriors’ President Robert Rowell said Don Nelson’s job is safe? Okay then… so they’re definitely still the most dysfunctional team in the NBA. But doubtless, Charlotte closed the gap this morning by trading for Stephen Jackson. With this, the Bobcats—a team thought to be immersed in financial turmoil—well, as Chad Ford notes, "In 2011 they will owe $36 million to 4 role players Diaw, Diop, Wallace and Jackson." And remember when they traded Emeka Okafor for Tyson Chandler in what was ostensibly a salary dump? Now they’re taking on a guy who’s due to make nearly $30 over the next three years. What’s the plan here?

Stephen Jackson to the Bobcats? Why? Just why?

Over at the Sporting News, though, Bethlehem Shoals offers a slightly more measured reaction:

For the Bobcats, shoot, they get an aging, but not aged, all-around contributor who falls into line when feeling secure and productive. Honestly, I don’t see how Jackson can hurt, provided he’s not a disruption. He just offers too much on the court, and that team lacks too much, for it not to be worth the gamble. Plus, if they ever get a Felton/Jackson/Wallace/Diaw/Chandler starting five going, that could be some serious future-ball.

So, he’s aging, sure, but he won’t hurt the team, and with his talent and Charlotte’s needs he could be a breath of fresh air. Especially if he can coexist with Larry Brown. So maybe this trade isn’t that nonsensical, and the Bobcats aren’t that crazy. Or maybe they are. Either way, the Golden State Warriors can make any franchise look sane: 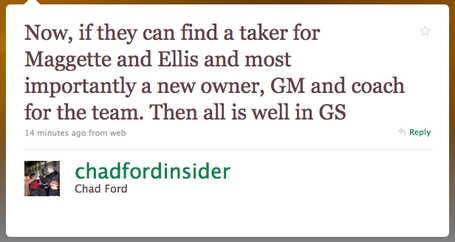 Stephen Jackson Finally Gets His Wish: Traded From Warriors To Bobcats