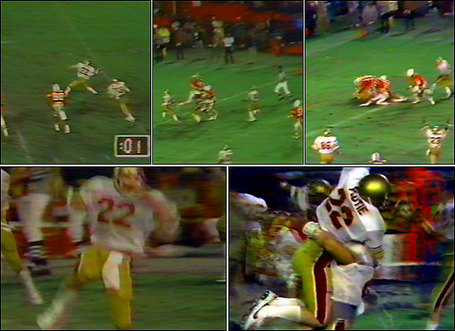 It may be the most famous moment in the history of college football.

A November 1984 contest between No. 10 Boston College and No. 12 Miami had all the scoring a fan could possibly want. The Eagles got off to a 14-0 lead, but Miami came charging back thanks to a school-record 447 passing yards from Bernie Kosar and four touchdowns from Melvin Bratton. Boston College quarterback Doug Flutie, in contention for the Heisman trophy, bettered him with four touchdowns and 472 yards.

With 28 seconds left, the Hurricanes possessed a 45-41 lead. Boston College had the ball at their own 20 and needed to go 80 yards on the damp, rainy turf at the Orange Bowl. It seemed like too great of a task to ask a team that had already produced 41 points. But Flutie wasn't ready to throw in the towel and completed several passes to get them to the Miami 48. After an incomplete pass, Flutie and the Eagles had only six seconds left to work with -- enough time for one final play.

Flutie got the ball from center and drifted backwards as he waited for his receivers to get deep enough for a Hail Mary. The play from scrimmage was something they had termed "Flood Tip" -- Flutie would throw it deep enough to a receiver, who would then try to bat the ball to another receiver, rather than trying to catch it. The play had produced a touchdown for the Eagles earlier in the year in a game against Temple. But now, on the road against the defending national champions, Flutie's chances of pulling it off were slim.

With just one second left, Flutie hurled the football from his own 37. To the amazement of everyone, Flutie's pass was not only able to cover the remaining 60+ yards, it was accurate enough that it streamed right into the hands of Gerard Phelan, who captured the ball a yard into the end zone. Phelan was supposed to tip the ball to another receiver, yet somehow he had been left wide-open, scoring the winning touchdown as time expired.

The Boston College sideline stormed the field and hoisted Flutie into the air, while Phelan got mobbed by his own teammates. "I thought I was dead," said Phelan, who totaled a fantastic 11 catches and 226 receiving yards. "But then I thought, 'What a way to go out.'"

"I had to laugh; it was a joke," said Bratton, who collected 134 rushing and 82 passing yards. "I cried, I smiled, I laughed. I had a big smile on my face when he caught it. I said, 'I don't believe this.' It's an experience I'll never forget. From now on, my philosophy is: Don't take nothin' for granted."

Even Flutie, who had encouraged his team on the final drive, admitted that their win was as improbable as it got. "It was a matter of who got the ball last," he said. "But 28 seconds? That's ridiculous. ... It was very slim. I wanted to get near midfield, and then I thought it was a 50-50 chance."

Thanks to a national TV audience on CBS, and a memorable call from announcer Brent Musberger, the winning throw is known as the "Hail Flutie" and is one of the quintessential plays in all of college athletics. For Flutie, it was the final stamp on his Heisman-winning season. In that very game, Flutie became the first collegiate quarterback to ever amass 10,000 career yards.

On New Year's Day, Boston College faced Houston in the Cotton Bowl and came away with a 45-28 victory, while Miami lost a close 39-37 duel to the UCLA Bruins in the Fiesta Bowl. Flutie, who had one of the greatest college careers in history, would have an extensive career in professional football. Although he struggled to find success in the NFL, he had a tremendous career in the Canadian Football League, where he won the player of the year award six times and became the first non-Canadian to be inducted into the Canadian Sports Hall of Fame. Flutie's counterpart in the Miami game, Bernie Kosar, had a much better time in the NFL, spending the bulk of his career with the Cleveland Browns and leading them to success in the 1980's.