1. UP LIKE THE PREMATURELY RISING HIPS OF AN IRRELEVANTLY REFERENCED BILL BUCKNER IN THE 1986 WORLD SERIES: Bill Belichick Calls the Worst Call Ever Called In The History Of Anything (Involving Boston Sports) (And The Patriots)(In A One Game Sample). Last week: NR. It is the mark of a truly horrific moment in sports analysis and its sordid history when society collapses, the zombies begin roaming the streets, and you find yourself huddled under a bridge eating MREs and canned tuna with Merrill Hoge, but that's where I'm at this week.

Belichick went for it with the lead against the Colts and two minutes and change on 4th and 2, the Patriots came up a yard short, and then a fascinating schism occurred as the Church of Macho and Stupid NFL coverage split down the middle like a ripe melon. In the Just Plain Stupid Camp fell Rodney Harrison (Belichick's former defensive go-to) and reliable Deacon in the Church of Stupidity (Screechy Faction)  Dan Shaughnessy, whose pulpiteering combined two classic memes-within-memes: kneejerk reaction combined with the kind of maudlin conceit you've come to love and dread from the Boston sports establishment:

This was as bad as anything the Red Sox ever did. Had it been a playoff game, it would be right up there with Bucky Dent, Bill Buckner, Aaron Boone, and History Derailed in Glendale, Ariz.

And Bill Belichick played the part of Grady Little.

So important a failure it almost deserves to be compared with the regional pasttime the NFL trounces in popularity? Now we know you're serious, Dan. The Meathead faction lined up on the other side, led by Hoge who praised the call for "setting a tone," and not because it was "the better choice based on math, something that might have worked out a lot better with a play other than a one yard pass to Kevin Faulk in the flat." He then mocked you for the pitiful little step on your truck's tailgate, because nothing associated with the NFL is weak or unmanly.

Thus a meteoric rise for this story, as it combines proximity to ESPN's headquarters, America's most glamorous combover/three-time Super Bowl winner Tom Brady, and the misunderstanding of basic probability and mathematics resulting in loud yelling as a rhetorical devices. Meanwhile, Advanced NFL Stats is just over there, being right and twiddling its thumbs and somehow avoiding being infected with the viral idiocy affecting all but 98% of NFL coverage.

The Titans owner shot the Bill the finger in duplicate. I like to imagine he said my favorite line, "Hey, they were having a sale on these (flicks bird), so I bought two (flicks both.)" Roger Goodell fined him $250K because he could, Bud Adams paid it because he farts hundred dollar bills thanks to oil money, and Ralph Wilson didn't think anything of it because he is old and cannot possibly have seen this live with his unassisted eyes.

If I were rich this would be the least outrageous thing I would do as an NFL owner, since as funny as this is, watching Trent Edward bound and gagged and shipped in a box with holes in it to Turkmenistan three days before the game would be much, much more amusing. (More expensive, too, and therefore more ballerish.) I'd also hire Dick Jauron just to fire him, but that appears to be a contractual obligation applicable to all NFL owners, who must hire Jauron at least once, employ him for a calendar year, and then fire him in order to be picked up immediately like the prize pony his isn't.

3. UP LIKE THE SWELLING OF A WELL-BRUISED EYELID: Pacquiao/Cotto. Last week: NR. Manny Pacquiao beat Miguel Cotto so badly his wife and child left in the ninth round of a 12 round bout to go look at something else besides Daddy's skull getting beat into a puffy, bleeding balloon by the little mean man with the mustache. If only Cotto had seen Pacquiao's training methods leading up to the fight, he would have never tussled with a man capable of beating up mutant crabs.

This now sets up the fight of the new millenium between Pacquiao and Floyd Mayweather, Jr., who will prepare for his fight by lugging whole bushels of American currency up a hill behind his house.

4. UP LIKE THE WHITE BLOOD CELL COUNT OF SOMEONE WITH AN INFECTION: Brock Lesnar's Intestines Score First KO On Record Against Brock Lesnar. Last week: NR. Brock Lesnar went from being in grave shape, then just to being in the hospital, and has now emerged after what is being described as "minor surgery" for a nasty case of diverticulitis, an intestinal condition caused by getting terrible full-torso tattoos on our chest and stomach. The reigning MMA giantsupermechagodzillaweight champion is going to see how the surgery heals and then consider fighting again, but there is no time table on his return. What's that? You're asking when we're going to work a steroid rumor in here?

Meanwhile, in 2005, Holly Salzman, M.D., and Dustin Lillie, M.D. of the University of California, San Diego, School of Medicine reported in their article Diverticular Disease: Diagnosis and Treatment: "Steroids also may mask symptoms (of Diverticulitis) and delay appropriate therapy."

Again, not saying Lesnar did steroids, just pointing out that steroids can have a documented effect on the diagnosis and treatment of diverticulitis.

We're not saying he took steroids. I'm just going to spray-paint the word "ROIDS" over a picture of him and just let you draw your own conclusions, reader. Get well, Big Non-Steroid-Taking Fella! Brock Lesnar is the leading cause of death in the state of Minnesota, and I will not accuse him of steroid use until I have a still photo of him injecting bull testosterone into his neck with a caulking gun.

5. UP LIKE THE BLOOD PRESSURE OF STEPHEN JACKSON'S AGENT: Don Nelson's Night Of The Long Knives At Golden State. Last week: NR. Less a cleaning house than an all-out putsch, Don Nelson first sent the malcontented Stephen Jackson and Acie Law to the hoops gulag in Charlotte for Raja Bell and Acie Law, and now may be accelerating the pace by trading Monta Ellis, as well. This may sound like standard hoops politics, but really, you have to dislike someone very much to send them to Charlotte to make a living.

6. UP LIKE THE HANDS OF SOMEONE BEING ROBBED BY A PELLET GUN: Tennessee Football Arrests. Last week: NR.

Tennessee football players broke an 11-month drought this week by committing a proper crime done most improperly, the robbery of two men outside a Pilot gas station. Confounding stupid factors include:

--Crime committed with pellet gun, which still counts as felony

--Players used a Prius as a getaway.

Let's revise that last one, though: not only does it have a tiny carbon footprint, but it also makes no noise on the approach or getaway. Well, not this getaway, since all three players were arrested shortly after the crime, with perpetrators Michael Edwards and Nu'Keese Richardson getting the boot from the team, but you know, a Prius works for most other getaways requiring stealth and silence up to 40 mph or so.

7. UP LIKE THE NEEDLE ON A SCALE: Mark Mangino, Anger Management Dropout. Last Week: NR. Mark Mangino has thankfully ended an old but still rich tradition in sports blogging, as he now cannot be mocked for his weight after this week, but must instead be prodded for his anger management issues. Mangino allegedly got physical with a player before a practice the week of the Colorado game, prompting a player revolt of sorts, parental complaints, and an internal review.

That's what the public knows, but Jason Whitlock sees it with the discerning, sympathetic eye that only a fellow fat man can have. it's also a chance to cash in on your "How much does Jason Whitlock weigh?" bet you might have hanging around.

This column is not an attempt to shame, embarrass or ridicule Mangino. As you know, I’m overweight. I’m a shade over 6 feet tall and this morning, I weighed 325 pounds. (Oh, that hurt to write.) I’ve been heavier. Much.

325 is...is about where we had Whitlock in our weight pool, actually. He explains that Mangino is enraged because he is fat, and that being fat makes people angry and frustrated, thus refuting the long line of jolly fatness inhabiting our popular culture: Fatty Arbuckle, WC Fields, John Candy, and Idi Amin. (What?)

8. UP LIKE A HORRIBLE ZACH RANDOLPH 3-POINTER: Isiah Thomas FAILboat Continues Sailing (into Reefs) at FIU. Last week: NR. Isiah Thomas yells at Tulsa to take their starters out in the middle of a sound beating, and then gets his first win as a college basketball coach by beating Florida Memorial, a small college of 1800 students whose existence was unknown to me before reading about their loss to Florida International. Prior to looking them up, one could have assumed they were invented, Washington Generals-style, to guarantee at least one victory for the Panthers under Thomas, but they seem real enough, and Isiah would probably botch that, too, by losing to the ringer team when a particularly buzzy fly distracted him in the lights of the gym.

She added: "I think the way the video came out, it did make me look like a monster. That’s not the type of player I am. I’m not just out there trying to hurt players. That’s taking away from the beauty of the game. And I would never want to do that."

The way the video came out came from footage of Lambert playing soccer as recorded by a camera. Though you never know. I thought the scene of here transforming into a wolf and devouring another player looked a little CGI-ish, and now this just has me thinking CONSPIRACY.

The Times also included this bizarre picture of Lambert taken from what appears to be an Ann Taylor Loft catalog. 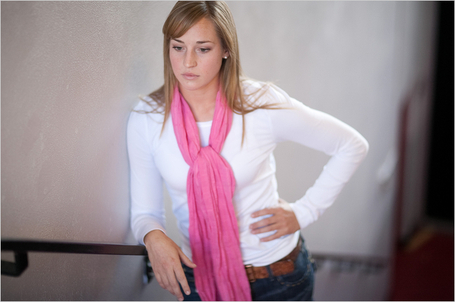 The tasteful top is $38, the pink silk scarf is $28, and the jeans are $55. Pulling a girl down by her ponytail on national television, however, remains priceless.

10. HOLDING ON BY A RECONSTRUCTED BICEP:  The Orbiting and Ever-Present Brett Favre PR Death Star/Country Bear Jamboree. Last week: 10. Holding steady at 10 this week, Brett Favre by definition cannot leave the Meme Rankings until retirement, and even then may hold sway over a spot from time to time by sheer clueless podunk charisma. This week's relevancy: the 8-1 Vikings would be happy to keep Favre for another year, meaning you will have at least one more year after this season of folksy Mississippi jibes, announcers keeping Jergens and paper towels in the booth for convenience's sake during Vikings games, and those free-wheelin', carefree backyard football games in Wranglers.

FALLING OUT THIS WEEK: SEC Officiating and How It Disproves The Moon Landings ... Fedor Emlianenko ... Sammy Sosa and His Disappearing Melanin ... Dan Snyder And The Beating He Has Coming From Some Just And Righteous Universal Force ... and Bill Simmons And His Enormous Doorstop Of A Book About How Awesome The 1986 Celtics Were.