Today marks the 25th anniversary of one of the most memorable plays in college football history. On November 23,1984, Doug Flutie changed the course of one program's history, his own life, and according to some, the sport of college football. From Forbes Magazine:

It's clear enough by now that the play stands as more than just the most memorable in college football history. No one could have foreseen it at the time, but Hail Flutie helped usher in a whole new era of growth for the sport, helping to drive the marriage of a newfound East Coast audience, drawn to the college game by an unlikely star, to a burgeoning television presence led by upstart ESPN. [...]

"Certainly a watershed moment," says ABC-ESPN football announcer Brent Musburger, who was at the microphone for CBS that day. Musburger even played the video clip two days later on NFL Today, the pro football pregame show he anchored for CBS. It was the only time that show ever played a college highlight. Pop "Flutie Hail Mary" into the YouTube search box today and you'll find 28 videos totaling over a million page views. [...]

...Ask sports business consultant Marc Ganis--without provocation--who he sees as college football's single most important driving figure of the past 30 years, and you'll get a quick answer.

"Doug Flutie," flat out. His rise to the national stage "re-established the Northeast, that part of the country with the densest population and the highest concentration of media decision makers."

But more than just a moment that changed college football--change that likely would have happened either way--Flutie's Hail Mary changed a school. I went to Boston College, and can testify firsthand: that play put the school on the map. What had been a regional school was suddenly a national draw, as applications skyrocketed, donations did the same, and one play ushered an academic institution into the upper echelons of America's higher education.

Of course, most college football fans will look back on that magical play and think about the wonders of the sport. But for me, it's greatest resonance is what sport can do. One good football player, you could argue, completely altered the history of a school. It may have happened without him, but look at some of the other football programs in the area: Holy Cross is no longer Division 1, Boston University doesn't have a football team, and today, Northeastern announced plans to cut funding to its football team.

Without Flutie, who's to say BC wouldn't have suffered a similar fate? And without a high profile football team, would Boston College enjoy the glamorous profile it does now?

It all changed on that one, magical Friday afternoon. The day after Thanksgiving, BC-Miami was the only game on CBS. With that, and that beyond-phenomenal ending, the entire country realized that Boston College had a football team, and the rest is history. Flutie won the Heisman, BC football continued to rise, and the whole school rode the wave of the Flutie sensation to become, today, one of the better universities in America.

It's a lesson, really: Next time you hear some nebbishy professor wonder "What the hell have sports ever done for an academic institution," remember Flutie.

Overnight, he put Boston College on the map, applications skyrocketed, and it changed school's whole trajectory. It happens every year with different storybook success stories. Remember George Mason? The same thing happened to them after that unbelievable Final Four run in '06. Check the jump in their applications between 2006 and 2007 (pdf here): 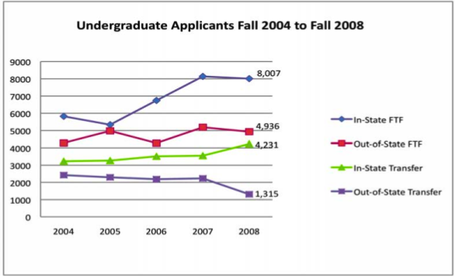 College sports may not be the most important thing in the world, and there's more to a college experience than just sports. But the next time someone hits that familiar refrain in academia and tries to pretend they're a waste of time or money, and we should all feel guilty about pouring so many resources into them, remember Doug Flutie and the Hail Mary. There's no telling what sports can do.