He Did It The Right Way: Why Wizards Fans Will Miss Abe Pollin

Share All sharing options for: He Did It The Right Way: Why Wizards Fans Will Miss Abe Pollin

I never met Abe Pollin. People around Washington speak of him in these reverential tones, and it never really registered. He bought the Baltimore Bullets a solid quarter-century before I was born. So to some degree, there was a generational disconnect. For me, he was just some gentle force off in the distance that I never quite understood, but always appreciated. Because as a general rule, good people are better than bad people.

And everyone always agreed that old Abe Pollin was GOOD. One of the best, and utterly beyond reproach in this town. Legendary for his philanthropy, impossibly loyal, and someone that cared deeply about making this world a better place. I never met him and got the chance to appreciate the man firsthand, but that much I could grasp from afar.

In basketball, the quality that distinguishes the great ones from the good ones is the effect you have on your teammates. Does he make his teammates better? is one of those hallowed questions that you only ask about people that are really, really good to begin with. And to be sure, looking back on all the Abe Pollin stories and listening to people around the city, this was a man that wanted to make other people better. He was really good in a lot of ways, but that's what made him great.

So it was odd, Tuesday night, walking to the Verizon Center after work. In a matter of minutes on Tuesday afternoon, a ho-hum regular season game between the 76ers and Wizards took on a whole new meaning. In some perverse way, it became a spectacle. How would the Wizards honor Abe? Would any of the players address the fans? Would the Wizards "win one for Abe"? How would it all feel?

But when I got there, what struck me most wasn’t some prevailing sense of mourning, but how genuinely bizarre it was that Abe ever presided over all this. Because the thing about sports, and especially the NBA, is that there’s just so much pomp and circumstance to the whole thing.

Light shows, smoke shows, booming Black Eyed Peas songs, a dance team, an energy team, Gilbert Arenas' entire existence, the Kiss Cam... And a giant metal Wizards logo hanging from the ceiling, spitting fire during the starting lineups, just minutes after a prolonged moment of silence that ended with spontaneous applause. Nobody in the stadium mourning Abe Pollin wanted all that other stuff last night. It just didn’t feel right. But it came because for better or worse, that’s what pro basketball is these days.

Not to sound like some disgruntled hipster, but the game is not the same anymore. It’s been sold; commercialized a thousand times over. And that’s fine. It helped a generation of fans, my generation of fans, fall in love with basketball instead of baseball. The NBA’s more popular than ever, and it’s a beautiful thing. But the fact remains: It’s not 1978 anymore. 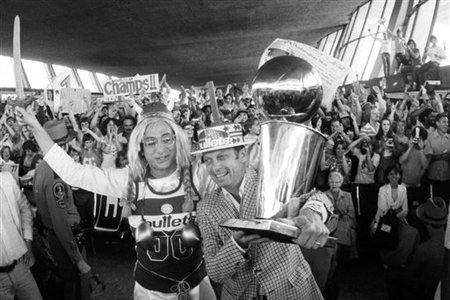 Which is probably the strangest aspect of his passing. Because in a contemporary basketball sense, the Washington Wizards may be better off with whoever succeeds him. Because Abe Pollin was a man who didn’t look to the bottom line when making decisions. He valued people; not profits or wins. He won a lot of games and made a lot of profits, but that was never the point for him. At the end of the day, what mattered most to him was that the people he cared about were successful.

And in some ways, this made him a victim of his own virtue. If Abe Pollin trusted someone, he believed in them through thick and thin—and that meant sticking with Wes Unseld as a GM for years after he proved incompetent. It meant keeping guys around that may not have been the best option for the team. And more recently, it meant giving Gilbert Arenas about $15 million more than anyone else was offering. Why? Because Gilbert was loyal, and he gave Abe’s franchise a heartbeat right after the greatest player in history had driven a stake through its chest.

Now, Gilbert’s coming off two knee surgeries, hobbling around like an old Chris Webber. A shell of his former self, and with a contract that’ll leave the Wizards hamstrung for at least the immediate future. In a basketball sense, it’s crippling and saddening and frustrating all that same time. But here’s the thing: nobody cares. Wizards fans never did.

Because look at the few paragraph above, on Abe’s "weaknesses." Is that really anything to complain about? It’s something to celebrate. If the Wizards win less games because Abe Pollin was loyal to a few of his favorites, they’ll still win more than the Redskins and their revolving door roster, operating at the whims of some megalomaniacal jerk. Abe Pollin embodied the Washington Wizards, and if you’d asked me a month ago whether I’d like another owner, I would have paused.

I would have remembered him hanging onto Unseld for years and years. That $100 million contract for Juwan Howard. The Gilbert contract. And I would have thought about Mark Cuban and Paul Allen, and how great it'd be to build a team with endless pockets and a one-track mind that’d bring us to the promised land. But then I’d think of Michael Jordan.

And I’d have remembered. Jordan treated Washington like crap; all he cared about was winning, and when he couldn’t do it himself, he blamed the people around him. And that wasn’t good enough for Abe. He was better than Jordan. He valued people. And when he brought Michael into his office and said, "You’re fired," it’s just about the proudest I’ve ever been as a sports fan.

As an owner in today’s game, Abe Pollin wasn’t perfect, but he was ours. He managed his franchise the same way he lived his life—according to a core set of principles that were unflappable. And if those principles made him obsolete over time, then so be it. I wouldn’t want it any other way.

At a time when literally thousands of other characters do things in sports the opposite, Mr. Pollin did things The Right Way. When I say it’s a wonder he still saw fit to oversee a pro basketball team, it’s a compliment. In so many ways, he’s better than what the whole experience has become. Where pomp reigns supreme, Abe had principles.

Years ago, pro sports and the NBA gave way to an era of cutthroat cap numbers and loveless management. It’s what works these days. In recent years, Abe Pollin didn’t fit anymore. And damnit, that’s why I’m gonna miss him so much.

He Did It The Right Way: Why Wizards Fans Will Miss Abe Pollin