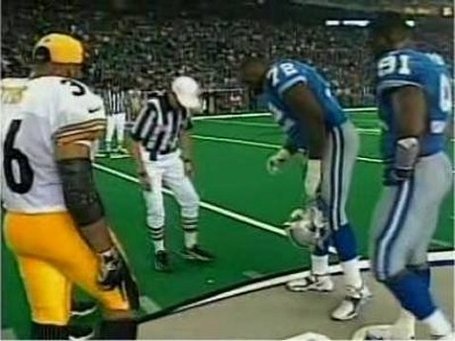 (Luckett, Bettis and a pair of Lions observe the coin flip)

One of the strangest controversies to befall a referee concerned the most basic facet of a football game: the coin flip. It was Thanksgiving day -- the Lions and Steelers were tied at 16 at the end of regulation. Phil Luckett met the team captains at midfield and tossed the coin into the air. Steelers running back Jerome Bettis, to the naked ear, appeared to call tails as the coin hung in mid-air...

But as he knelt down to retrieve the quarter, Luckett announced to the Silverdome crowd that Bettis had called heads and that the coin was showing tails. Bettis and teammate Carnell Lake immediately argued with the head official; it seemed obvious that the word out of Bettis' mouth was "tails." Luckett insisted that he had called "heads" and conferred with the other officials. Despite the protests of the Pittsburgh sideline, Detroit was awarded the right to receive the football at the start of the overtime.

Less than three minutes into the extra session, Jason Hanson booted a 42-yard field goal to put the Lions on top. Since the format for overtime was sudden death, Hanson's kick gave the Steelers a 19-16 defeat, one that could have been prevented had they won the coin flip.

"What makes me mad is when you fight and scratch for 60 minutes out there, and the game is decided by guys who wear striped shirts," Steelers coach Bill Cowher said. "There's something wrong about that." He was by no means alone in his thinking. The general consensus was that the Steelers had been robbed by an incompetent official.

After the game, Luckett told reporters that Bettis actually called "heads-tails," and that he honored the first declaration. "That is a lie," Bettis responded. "That's a baldfaced lie."

Detroit cornerback Robert Bailey heard differently. "To me, it sounded like one guy called heads and one guy called tails. That way, no matter what happens, you can argue. It's an old trick."

In only a few days, technology vindicated the beleaguered referee. Pittsburgh television station KDKA enhanced the audio and found that Bettis had given two separate commands. Removing all ambiguity, a sideline conversation between Bettis and Cowher was also picked up, one where the Steelers back clearly defines that he said "hea-tails."

Within a week, NFL commissioner Paul Tagliabue announced a change to the coin flip format. From then on, players would announce heads or tails before the toss and not while it was in the air.

Though Bettis admitted that the "baldfaced lie" was justified a few years later, Luckett could not escape the branding from the incident. To the average sports fan, Luckett was an ignoramus, an official so bad that he couldn't even handle a coin flip. In a profession where anonymity was a sign of success, Luckett was the most known official in the country. Tagliabue, ignoring the KDKA discovery, called the incident unresolved and failed to show that the league supported his decision.

Luckett became the most heavily-scrutinized official in the league. A bad call was seen as further evidence to his badness, even if he wasn't the one to blow the whistle. Just one week after the coin flip fiasco, Luckett was on the field during another controversy. In a game between the Jets and Seahawks, Jets QB Vinny Testaverde lunged at the end zone on a quarterback sneak late in the game. Cameras showed that Vinny was a yard shy of the goal line, however line judge Ernie Frantz ruled it was touchdown. Vinny's erroneous TD not only gave the Jets the win, it cost Seattle from winning the game and, by extension, making the playoffs.

After the season, instant replay was re-instituted into the NFL. The injustice from the Jets-Seahawks game was described as the primary reason.

The Phil Luckett coin flip mishap, perhaps more than any prior incident, raised the strongest argument that NFL games shouldn't come down to the rotations of a quarter. Nonetheless, despite the wishes of some sports fans, it did not lead to a change in the league's sudden death overtime format.