While news out of Lubbock has slowed to a trickle since last night's allegations and this morning's retort from Leach's lawyer and a host of ex-players, the rest of us are left to wonder what, exactly, we're talking about here. Is it a story of an abusive coach, or a whiny player? While the photo below doesn't necessarily provide a definitive answer, it helps clarify where Leach sent Adam James.

Was it a shed, an equipment room, the press box, an electrical closet...some dark hole in the backwoods of Lubbock, Texas? According to our Texas Tech blog, Double T Nation, it was the white structure in the background of this Texas Tech practice, to be exact: 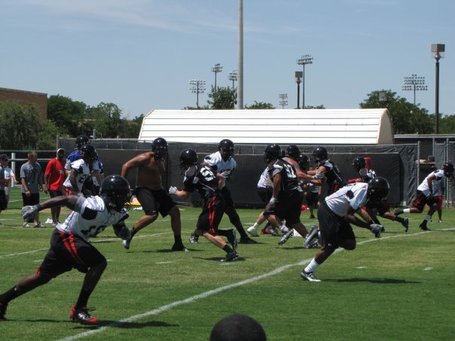 So, what do you think? I guess if you were forced to stay in there for three hours, it would be pretty frustrating. But all things considered, that seems rather tame compared with the dramatic tales of Leach sending James to the "darkest, tighest spot" he could find.