Have You Heard Of Chris Johnson?

Share All sharing options for: Have You Heard Of Chris Johnson?

Maybe it's because of his name. Yeah, probably his name. "Chris Johnson." It sounds silly, but part of greatness is mystique, and a name goes a long way toward myth-making. Like, "Randy Moss" just sounds like someone that was born to be a superstar.

If the Titans running back, were named, say, Jamario Moon, maybe he'd be more famous. Even if he were named Chris John-ston, there'd be more of that mystique. It sounds stupid, I know, but really: "Chris Johnson?" Is that a white linebacker for Penn State? Can we have a mulligan on the Chris Johnson naming process? Or maybe he could just switch names with Lendale White for the next ten years. That'd work too.

Because he's maybe best player in the NFL, and definitely the most exciting. Over at Kissing Suzy Kolber, they mentioned he needed a nickname, and it's true. Because whether it's his vanilla name, the relative anonymity that comes with playing for the 5-6 Tennessee Titans, or that, with dreadlocks, gold teeth and a southern drawl, he's not as camera-friendly as someone like Adrian Peterson, the sports world has been slow on the uptake with this one. It's maddening; if I told you there's an Eric Dickerson clone playing in the AFC, is that something you'd be interested in?

He's averaging SIX yards-per-carry, and there's a decent chance he'll rush for 2,000 yards this season. Sure, he doesn't have a black-and-white commercial that makes him look like an alien, but his game's pretty freakin inhuman on its own. He's already scored ten touchdowns, and other than Vince Young's heroics last week, we're talking about someone who's been counted on to provide 98% of the "attack" from the Titans' offensive attack.

Think about that. If you're a team playing the Titans--like the 13-0 Colts, for instance, who play Tennessee this weekend--literally the only thing that scares you about the Tennessee offense is Chris Johnson. In fact, with their defensive struggles over the first six weeks, the only thing that scared you on their whole team was... Chris Johnson. And with teams scheming all week to stop him and only him, nearly every Sunday, you look up and see a new ridiculous set of runs on YouTube.

And it's not that nobody realizes he's good, because that much is obvious. But for some reason, in this era of NFL ubiquity--where every game's preceded by a bloated pregame show, and followed by a week's  worth of highlights and analysis--nobody quite realizes how good. Like, he belongs in the conversation for MVP. He's quite possibly the fastest running back of all time. He's better than (gasp) Adrian Peterson. And despite his impossibly boring name, he's the most electrifying football player on the planet.

Because he doesn't just score. He scores on 80-yard runs against 8-man fronts. He's had touchdowns of 91 and 89 yards this year, and in every game except two, he's had at least one run go longer than 30 yards. If the league held a draft right now, wouldn't Chris Johnson be among the top 5 players picked? Wouldn't you take him over Adrian Peterson? He's got 2 career fumbles... Peterson has 19. And that's not to discredit Peterson--he's historically good in his own right. But however absurd, there's someone more talented than the guy they call "Purple Jesus."

He may not have the name recognition or the seven-figure Nike contract, but Chris Johnson from East Carolina is almost certainly better than your favorite player. He's what Reggie Bush was supposed to be; the type of player that 12-year-olds create in video games and then quit playing with, because it gets boring running for 80-yard touchdowns every time. It's this simple: He will run over you, and then run by you.

Why isn't the world completely obsessed with this guy? Is he THAT shy? Can we arrange for him to date a Kardashian? What needs to happen for "Chris Johnson" to become one of the biggest names in sports? He's got the speed, the toughness, and those awesome, awesome dreadlocks. (Coupled with Lil Wayne's ascendance to pop culture ubiquity and Chris Johnson's inevitable rise, dreadlocks could become a symbol for not only drug-addled insanity, but also boundless excellence on the football field. Wouldn't that be great?)

He's that good. Watch the Titans game this weekend. They're playing the Colts, so you know it'll at least be a semi-relevant game. There's no excuse. The Titans, like the Saints and Colts and Vikings, are officially must-see TV. Not for some undefeated season or juggernaut offense, but because of one player that makes all other players look kinda boring in comparison.

"Chris Johnson." Have you heard of him? 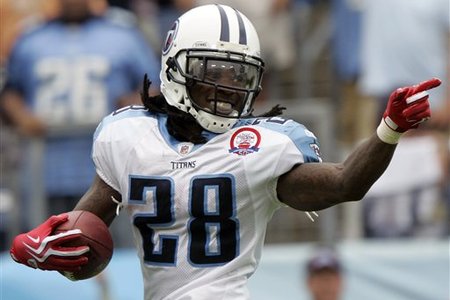 The Name's Chris Johnson; Have You Heard Of Him?