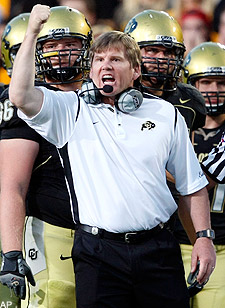 Spring's the time to ease into things with college football. Work hard on your conditioning, get into the playbook a bit, try to keep players out of the bars and under the radar ... a peaceful time to work, focus, and size up what your team's going to be, and to set reasonable goals for your team going into the fall. If you're Colorado coach Dan Hawkins, you do all that, and then promise your team is going to win 10 games without reservation or an escape route. â†µ

â†µâ‡¥No matter. The ebullient Hawkins is expecting his fourth Buffs team to make what amounts to a quantum leap in the win column. And he wants his players to know his belief in them is unwavering -- thus, the "10 wins and no excuses." â†µâ‡¥

â†µâ‡¥"It was a challenge to the team ... I don’t ever want to back off excellence as the bar," he told InDenverTimes.com. "I want to keep that bar high, that standard high." â†µâ‡¥

â†µHe's a bulletproof tiger, folks, a rocket made of glory and buffalo hide soaring toward orbit around the planet Awesome. He also has a schedule with seven home games and one very winnable game on the road against Miami of Ohio, so he can promise these kinds of things with some degree of confidence.
â†µ
â†µ(Correction: that's now Toledo. Still, a layup of a game if they don't get caught up in Toledo's crazy nightlife the night before.)
â†µ
â†µWhat he's not mentioning is being pasted by whatever rough beast comes out of the Big 12 South to face Colorado in a hypothetical Big 12 title game if they win all those games. But there's no need to warn a pretty cow about to turn the corner into the slaughterhouse. It's had a good life. Let it enjoy its last few moments before it meets the bolt gun held by either Sam Bradford or Colt McCoy.â†µ