Yesterday, Showtime called a press conference for Monday at Madison Square Garden in New York to announce their long-rumored super middleweight round-robin tournament with the final likely to take place in May or June of 2011. All six of the tournament’s participants are expected to attend the presser – Arthur Abraham, Jermain Taylor, Carl Froch, Andre Ward, Mikkel Kessler and Andre Dirrell. 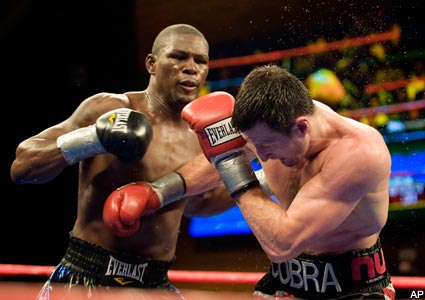 It’s a unique concept, this extravaganza that Showtime is trying to pull off, and one with a lot to recommend it. But as far as I can see, the cons far outweigh the pros, and I have no illusions that Showtime will make it to the finish line with this grand experiment.

First off, allow me to make full disclosure: among my many freelance writing gigs, I regularly do features and fight reportage for HBO Boxing’s website. Obviously, HBO is a direct competitor of Showtime, but I can assure you that has no bearing whatsoever on the opinions I’m stating here.

As for those opinions, I’ll start off by congratulating Showtime for thinking outside the box, trying to generate some buzz for the sport, and at the same time attempting to ascertain an actual, undisputed champion of a weight class in boxing. People constantly demean the BCS and the state of college football’s championship system, and yet any fight fan will tell you that the BCS is the most rational, reasonable and air-tight method in the world compared to what boxing has in place to crown its titlists. Between the multitude of sanctioning organizations and title belts, it is virtually impossible for anyone to stake an absolute claim to being the true champion of a weight division at any given time, and the sport suffers greatly for the resulting confusion.

So, as many people long have begged of college football, Showtime now is trying to give boxing an actual tournament to settle the issue once and for all, and at the very least, I applaud the concept. Not coincidentally, they’ve chosen the 168-pounders because that’s where they happen to have the broadcast rights to most of the prominent fighters.

Therein lies the most glaring problem with their tournament, a problem not unfamiliar to those schools left out in the cold come Selection Sunday for March Madness. And this is no 64-team field. Showtime has six fighters locked up for this tournament, and they are indeed six worthy names. But not among those six is the current champion of the IBF (one of the three major sanctioning organizations), the Romanian by way of Montreal, Lucian Bute (pronounced, to my great delight, “boo-TAY”).

As far as I’m concerned, the omission of Bute taints the entire competition right from the outset, because he’s arguably the best or the second-best 168-pounder in the world right now. Word is that Showtime wanted Bute to participate, but his team wouldn’t commit to the tournament format. Instead, he’s going ahead with his scheduled rematch with Librado Andrade in the fall, with Andrade being yet another top 68 left out of the Showtime mix.

If you want, you can dismiss Bute by taking the line of “well, he could have been in the mix, but he chose not to be, so screw him.” But answer me this: if there was a tournament right now to crown the best men’s tennis player in the world and Rafa Nadal refused to be in it, would that tournament have any legitimacy whatsoever?

Here’s the fact of the matter – of Ring magazine’s top-10-rated super middleweights, this six-man tournament will include four: Mikkel Kessler (#1), Carl Froch (#3), Jermain Taylor (#8) and Andre Ward (#9). One can certainly make a case for Arthur Abraham’s inclusion given his ferocious track record as a middleweight champ, but nevertheless, the man has fought at 168 exactly once. And with Bute and Andrade, numbers two and four in The Ring rankings respectively, absent from the Showtime roster, along with current WBO champ and Ring #7 Karoly Balzsay, the tournament feels bogus before it’s even begun. Especially when you have guys like Jermain Taylor and Andre Dirrell involved. If it were a 10-man field, and Bute, Andrade and Balzsay were in it, I would have no problem with the presence of Taylor and Dirrell. As it is, however, those two guys getting a crack at the title to the exclusion of other more worthy entrants makes the whole enterprise irreparably flawed.

Most boxing writers out there seem willing to dismiss this fact, which surprises me. The general take I’m reading is one of excitement at how much fun the tournament will be, and an overall congratulation on the unique points system, which awards three points to a fighter for scoring a knockout, two for winning a decision, and zero, obviously, for a loss.

Even this, I admit, I find specious, and on that score I’ll confine my argument to one point – Joe Calzaghe, not exactly a knockout puncher and yet without question the best 168 of the last ten years, would be at a severe disadvantage in this system. If this gambit of Showtime’s is really aimed at crowning the undisputed super middleweight champion of the world (and if isn’t, what the hell is it aimed at?), then how can it invent rules that have nothing to do with winning or losing a fight? How about next March Madness they do a round-robin and you get three points for winning by 20 points or more, two points by 20 or less, and zero for a loss? Yes, we all love to see knockouts, but if we’re suddenly deciding that a knockout is the only way to truly and entirely win a fight, then we’re essentially rewriting the rules of boxing.

So, am I interested in seeing who the best puncher is among Abraham, Kessler, Taylor, Froch, Ward and Dirrell? Not overwhelmingly, but sort of. Look, I’m a hardcore fight fan, so I’ll tune in, no doubt. I’ll be curious. Unfortunately, I doubt the whole mess will get very far, because given the scope of what Showtime is trying to achieve here, given the number of fights they’re expecting to pull off without a hitch over the next two full calendar years, and given the egos of the promoters, trainers, mad men and bag men who run rampant in the labyrinthine backrooms of this business, there is simply no way this thing stays together until the conclusion. What happens when Arthur Abraham gets some juice for a big knockout on Showtime and then HBO comes offering him big bucks to fight Kelly Pavlik? Is he really going to pass on that to fight his Showtime mandatory with Andre Dirrell? What if Calzaghe suddenly decides he wants to fight Froch at Wembley Stadium? What if Jermain Taylor can’t make weight anymore? What if Bute/Andrade II is another classic (like their first fight), makes the tournament seem even more bogus than it did before, and no one wants to be in it anymore? What if someone gets hurt or arrested or just out-and-out quits because they’re sick of it?

This is professional boxing, not college football or basketball, the Olympics or anything that even remotely resembles an organized, controlled universe where rules exist as anything but suggested guidelines to be broken as soon as somebody offers you a bigger check. The “what-ifs” in this sport are as varied and bizarre as can be imagined, and yet generally trace their roots back to that ever-abundant and mundane wellspring of motivation known as “greed.” So when you think about the potential long-term success of Showtime’s venture, there’s really only one question to ask yourself: will staying in this tournament to the bitter end be the best way for every fighter involved to make the most amount of money possible? If the answer to that is "no," then you can be sure that the whole thing will fall apart fast.

Because I am all but certain that the answer is "no," I tell you this: if this tournament does manage to proceed without a major defection or disaster to its celebrated finale in 2011, I will gladly fight a three-rounder with the winner for nothing, for charity, for whatever. For the winner’s satisfaction at beating on my sorry ass just for being such a smarmy, naysaying writer. And people, let me tell you something: I make this offer despite the fact that although I do weigh almost exactly 168 pounds right now, I am a natural junior middleweight who is merely fat.