Kelly Pavlik: A Man without a Plan

Share All sharing options for: Kelly Pavlik: A Man without a Plan

What a difference a year makes. Around this time in 2008, Kelly Pavlik was considered one of the two or three biggest names in boxing, a living Rocky figure with knockout power in both hands and a no-nonsense, hard-nosed, Youngstown pedigree that endeared him to the core boxing audience of cigar-chompers and serial nostalgists. It did not hurt him that he, as Larry Holmes was once wont to put it, "had the complexion to make the connection." A working-class white knockout artist always has a leg up on boxing stardom, and Pavlik was a stellar example of the rule. 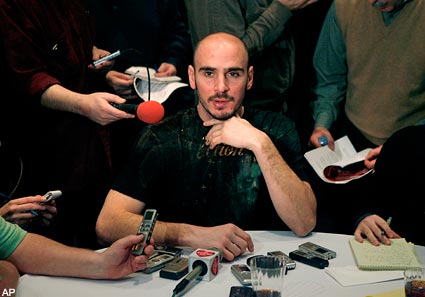 But Pavlik and his team made a fatal mistake. Unable to find a compelling defense of his middleweight crown or to lure Joe Calzaghe to the ring for a big PPV extravaganza, they instead opted for Bernard Hopkins at a catch-weight of 170 pounds in October of last year. Pavlik had never fought at 170 pounds. What’s more, he appeared to take the 44-year-old Hopkins lightly, with all of his and his trainer’s talk in the lead-up to the bout centering on when and how he would knock Bernard out.

Considering the fact that Hopkins is known to be one of the most intelligent and wily boxers in the sport, and that he has never been stopped in his career, this was hubris in the extreme, and it came back to haunt Pavlik. He very nearly got knocked out himself, as B-Hop went all Archie Moore on him and gave him a boxing lesson. It was an utterly humiliating night in the ring for Pavlik, who seemed slow, amateurish and helpless in the face of Hopkins’ creatively angular onslaught. By the time the lopsided scorecards were being read, the Pavlik Express was completely derailed.

Today, that train remains in the station. Since the Hopkins debacle, Pavlik has had only one fight, a low-profile mandatory with Marco Antonio Rubio this past February televised on an in-house Top Rank pay-per-view card. Other than a recent, seemingly bogus rumor that he was in rehab, Pavlik has been absent from the spotlight since then, with a planned June fight with Sergio Mora one of this summer’s many dubious cancellations. The story was that Pavlik had a hand infection and couldn’t fight. It was an excuse that seemed to baffle even Pavlik himself.

Now the word is that HBO and Top Rank are trying to put together a Pavlik comeback fight on the network in the fall, with Joe Scalzo of Vindy.com reporting this past weekend that four names are in the running to be Pavlik’s next opponent -- Felix Sturm, Sergio Martinez, Winky Wright and Karoly Balzsay.

Sturm would seem to be the most natural of the quartet, given that he is the current owner of the WBA middleweight strap, which would make a Pavlik/Sturm fight a title unifier at 160 pounds (Pavlik still owns the WBC and WBO belts). But HBO, though willing to air the fight, is not offering much money for it given Sturm’s low-profile here in the States.

Honestly, I find it hard to imagine either HBO or Pavlik’s people being thrilled with any of that quartet of opponents listed above. Sergio Martinez is a natural 154-pounder (and the current WBC junior middleweight champ), Karoly Balzsay is relatively unknown and a natural 168-pounder (the WBO super middleweight champ) and Winky Wright ... well ole Wink is just a pain in the ass. One would think that the last think Pavlik would want to do given that schooling he got at the hands of a boxer like Bernard would be to put his titles and reputation on the line against Winky Wright.

The other name that’s out there right now for Pavlik is without question the biggest fight he could make for himself – Paul "The Punisher" Williams. But Williams’ promoter, Dan Goossen, told Boxing Scene recently that talks between him and Pavlik’s promoter, Bob Arum, went nowhere. "I told him (Arum) that we would be willing to do the fight 50-50," Goossen said, "and Bob didn’t want any part of it."

It’s not hard to imagine why. Williams is a veritable nightmare for Pavlik, a tall boxer with a heavyweight’s reach who boxes effortlessly, punches from an impossible variety of angles, and throws about a thousand shots a round. Having shown himself to be vulnerable to a fighter who shows him angles and maintains a high work rate, I’d say Pavlik needs a bout with Paul Williams like he needs a hole in his head. Like he needs a hundred holes in his head.

But so ... who then? This is the problem for Pavlik, and it has been since he beat Jermain Taylor in their rematch in February of 2008. It’s what led his team to make him that foolhardy bout with Bernard at 170 – there was just no other name-brand fighter out there for him to face. At the time, the Pavlik Express was chugging along nicely, and just about everyone in boxing thought that eventually Kelly would walk Bernard down and catch him in that wood-chipper of a one-two machine that made Pavlik a star.

Because that didn’t happen – because the exact opposite happened – Pavlik and his handlers now have themselves a serious problem. A boxing Machiavelli like Bob Arum has to be thinking to himself at this point, "Maybe, just maybe, Kelly Pavlik isn’t that good." After all, he doesn’t really have any A-list scalps on his belt. He beat Jermain Taylor twice (who, of course, beat Hopkins twice in highly disputed decisions) but there is no one in the fight world left standing who will tell you that Jermain is or ever was a great boxer. A-plus potential, but Jermain probably maxed out at B-plus performance.

Pavlik also beat Edison Miranda at a time when Miranda’s star was rising. Again, though, what we’ve since learned of Miranda is that there’s precious little to him other than a mighty right hand.

Because of the phenomenal Miranda knockout, however, and because of the thrilling, back-from-the-dead routine he pulled against Jermain in their first fight, Pavlik became a major boxing commodity, and now Bob Arum is faced with the challenge of maximizing him profit-wise without risking too much. The stakes are high, because there’s no doubt that Pavlik’s next loss would be his last on the big stage.

You add to this challenge the fact that quite a few of the natural opponents for Pavlik just got swallowed up by Showtime’s Super Six tournament, and Arum has a near impossible situation on his hands. He needs to get the Pavlik Express back on the tracks against someone who he knows Kelly can beat, and yet it has to be a fight that HBO is willing to televise and also a fight that at least someone who does not live in Youngstown, Ohio is interested in seeing. The candidates for such a fight are few and far between. It seems to me that he doesn’t have much of a choice but to accept the short money for Sturm and hope for a crowd-pleasing knockout that gets Pavlik some headlines. They may not be thrilled with the payday, but Pavlik and his people can at least be comforted by the fact that they’ll be back headlining an HBO card, and they can be reasonably confident that their man will win.

Although, myself ... at this stage of the game I would say that Pavlik is anything but a cinch to beat Felix Sturm. But we’ll cross that bridge when the bridge gets built.