Share All sharing options for: NY Post Tops Its Indecency with a Side of Stupidity in Erin Andrews Coverage 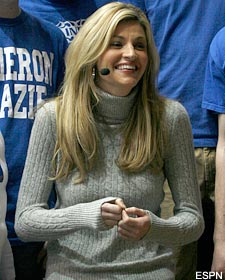 The New York Post posted screencaps from the Erin Andrews peephole â†µvideo today. Don't be shocked, because you shouldn't be. They would â†µalso post pictures of me throwing a kitten into a wood chipper, and â†µuse the headline "GOODBYE, KITTY: INTERNET QUIPPER TURNS CAT RIPPER â†µWITH CHIPPER." They're America's biggest bastion of unabashed yellow â†µjournalism, and have no shame whatsoever about anything. Trying to â†µscold them for using actual screenshots -- illegally obtained â†µscreenshots, no less -- is like trying to explain the unsanitary aspects â†µof eating cat feces from a litter box to a Labrador retriever: it â†µneither understands what you are saying, nor does it intend to stop â†µdoing what it was designed to do. â†µ

â†µSo, yeah: bad, but not surprising or scoldworthy. (Again: they don't â†µspeak "shame.") One thing the Post usually gets right, though, is â†µgossip, which is where the gray dung beetle of papers fails here. From â†µtheir article on Andrews, which we're not going to link because they â†µhave illegally obtained (though censored) nude photos of one ESPN â†µsportscaster whose rights have been violated in the extreme: â†µ

â†µâ‡¥It's been speculated that the video was taken in Omaha, â†µâ‡¥Neb., last month while Andrews was covering the College World Series. â†µâ‡¥But the local police department and US Attorney's Office said no â†µâ‡¥reports had been filed with them. â†µ

â†µThe video has been posted for at least four months, something the Post could have â†µverified with careful internet research requiring full utility in the â†µEnglish language and the ability to read gray lettering. The Post didn't even bother â†µto do the legwork that (following link is to a site considered slightly adult and probably NSFW) Don Chavez did, and when a one-man Boobs 'n â†µBeer site is outdoing your crack team of Manhattanite gossipistas, it might be time to start wondering whether you're even doing the â†µmeager amount of salacious, occasionally unethical and altogether â†µtrashy amount of work you are undoubtedly overpaid to do. â†µ

â†µOh, and this whole thing is horrible, but you already knew that. If â†µyou didn't know that, then I have a proposal for you involving the â†µaforementioned woodchipper, a diving board, some sparklers, and me â†µfilming the whole thing while blasting the 1812 Overture from speakers. â†µThe Post will love it, trust me. â†µ

â†µUPDATE: Evidently the Post wasn't alone in its idiocy today. Both FOX News and CBS aired still shots from the illegal video during morning show segments today, according to MediaMatters.org. â†µ