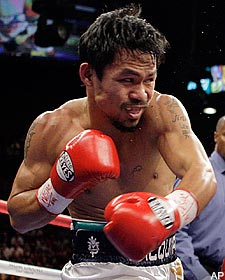 Bob Arum’s Top Rank Promotions officially announced yesterday that the Manny Pacquiao vs. Miguel Cotto fight, scheduled for November 14 at the MGM Grand in Las Vegas, is a done deal at a catch-weight of 145 pounds. In what has been a strange, transitional year for the sweet science, this is likely to prove the only true super-fight of 2009 in terms of both the legitimacy of the match-up and the interest it generates.

So far this year, there’s only been one really big boxing event – Pacquiao vs. Ricky Hatton on May 2. And though that was a high-profile bout that garnered a lot of crossover attention and did big business (over 800K in PPV buys), when Pacquiao pulverized Hatton in only two rounds, it confirmed the belief of most boxing pundits that the fight was a mismatch from the start. Once again, Hatton rode his rabid following and great popularity in the UK to a gigantic payday, and once again he proved to be a second-rate fighter with first-rate drawing power.

Other than Pacquiao/Hatton, the only other meeting of A-list names in ’09 was January’s fight between Shane Mosley and Antonio Margarito at the Staples Center. But while that was also a very successful promotion, the mere fact that it wasn’t a pay-per-view event indicates its stature in the category of bling. When a fight is really big, it’s PPV, no questions asked. Mosley/Margarito was right on that pay-per-view bubble, and in the down economy, the promoters chose to put it on regular HBO, a smart move for all concerned.

As far as the rest of the year’s schedule goes, there’s only one fight left on the roster to even compete in magnitude with Pacquiao/Cotto, and that’s the Floyd Mayweather/Juan Manuel Marquez fight taking place on September 19, also at the MGM Grand and also on pay-per-view. Buoyed by a media blitz and the HBO 24/7 treatment, this bout may do big numbers, although doubts linger about the interest in the fight. But for boxing insiders, the doubts concern the relative size of the two principals. Marquez is a truly great and heroic fighter, but he recently looked undersized at 135 pounds when fighting Juan Diaz. He’ll be fighting Floyd at somewhere in the neighborhood of 144 pounds. The likelihood of a man who is at his physical best as a super featherweight jumping up three weight classes to defeat a talent of Floyd’s caliber has to be rated at slim to none.

Thankfully, Pacquiao vs. Cotto is not sullied by any such concerns. This is a Grade A, hands-down, pay-per-view level showdown of stars in which there are sound reasons to believe that either man has the edge going in. The first gambling odds to appear on the internet list Pacquiao as a 2-1 favorite, but I doubt that will stand up for very long. Serious questions will hover over both fighters heading into this thing. Will Pacquiao be able to handle the punches of unquestionably the biggest, strongest man he’s ever faced? Will Cotto be able to maintain his strength dropping down to 145 pounds, and will he be able to cope with Pac Man’s blinding speed and relentless attack? These and other questions are sure to provoke fiery debate among the boxing cognoscenti over the next four months, because each of these fighters is backed by a large and devoted following. In short, what we have here is a true fight fan’s delight, a meeting of high-profile and worthy opponents that right now looks as if it could pull off that rare boxing double of being both big and good.