David Haye is Ducking The Klitschkos

Share All sharing options for: David Haye is Ducking The Klitschkos 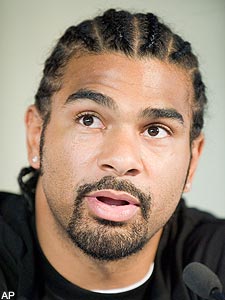 Let me be plain about this: David Haye is really starting to make me angry. I stood behind this loud-mouthed gabbagool when all of my colleagues in the boxing universe were calling him an unproven, over-hyped clown. To be honest, I knew they were right. But I’m just so desperate for a heavyweight to do something fantastic and inspirational that I got on board the Haye Train anyway, chasing a dream that I knew was highly unlikely to come true.

At the time, however, I thought the problem was that Haye never would be able to beat a Klitschko brother, not that he would never actually deign to fight one in the first place. On that score, I think I can be forgiven for my lack of foresight. After all, this was a man who just this past spring was making as if knocking out both of the Klitschko brothers was his sole purpose in existence. He signed for a massive stadium fight in Germany with Wlad Klitschko and showed up at the presser wearing a truly ill t-shirt emblazoned with an image of him holding both of the Klitschkos’ bloody, decapitated heads in the air.

In short, he was giving off a very strong vibe that he was interested in fighting the Klitschko brothers. But here we are a few months later and ol’ Decapitation David has now ducked not one but both of the Brothers K! He pulled out of his fight with Wladimir, scheduled for June 20, citing a back injury, an excuse that no one on either side of the Atlantic bought as legitimate. And now, NOW, he’s pulled out of a scheduled September fight with Vitali Klitschko after both sides reputedly had agreed to a deal in principle. Instead, Haye announced today that he will fight the regretful Russian giant Nikolay Valuev in November for Valuev’s WBA heavyweight title. Predictably, Haye already is dubbing the bout “David vs. Goliath.”

Me, I got a better name. How about “The Big Fraud vs. The Big Easy”? Or “Wusshead vs. Sasquatch"? I mean, how can this guy live with himself after all the hot air he’s blown about all the terrible things he’s going to do to the entire Kltischko family? And now he backs out again and takes a bout with that seven-foot joke of a human statue named Valuev?

He’s making the case in the press today that the Klitschkos were making unreasonable demands on him contractually. He claims that he’s going to take Valuev’s title and then he’ll be able to deal with the two brothers on equal footing. I tend to think he’ll probably be in Haye Who Cried Wolf territory at that point and the Klitschkos will never even consider doing a deal with him again. Nevertheless, Haye insists that his decision to opt out of the Vitali fight is a blow for freedom, even going so far as to subtly play the race card by saying “I will not be a slave fighter.”

Who knows what he means by that. A double-rematch clause was rumored to be written into the original deal he struck to fight Wlad Klitschko in June that bound Haye to grant an automatic fight to Vitali should he beat Wlad, and then an automatic rematch to Wlad should he beat Vitali. Which on the face of it doesn’t sound like the worst thing in the world, considering that fights with either brother are the most lucrative fights in the world for Haye bar none, and also considering that (and I refer back to the t-shirt business for my information on this) Haye is purportedly very interested in doing both Klitschko brothers great physical harm.

I have no doubts that the Klitsckos were working him over big-time at the negotiating table, but them’s the ropes in this hustle, Hayeburger. You essentially have done nothing in your heavyweight career yet but talk a big game and wear cool t-shirts. You’re a former cruiserweight champ with a stoppage loss to Carl Thompson on your record. The most impressive scalp on your belt is a past-his-prime Jean-Marc Mormeck, who wasn’t all that impressive even when he was in his prime. No matter how much you blab, son, when your resume is that bloody thin, you’re going to have to settle for table-scraps if you want to sit at the king’s table, or even the king’s brother's table. I mean, look at frickin’ Miguel Cotto for Pete’s sake. Guy is a big star who regularly sells out Madison Square Garden and who owns a legit welterweight title and some huge victories on his record, and yet he’s cutting weight and taking the short end of a 65-35 split just to get in the ring with Manny Pacquiao.

You know why? Because he’s got cojones grandes, that’s why, because he knows that 35 percent still translates into the biggest payday of his career, and because he actually wants to fight the guy to prove himself on the biggest stage. As for you, Mr. Hayeducker, no matter what reason you may offer for choosing to fight Valuev rather than Vitali, at this point one has no choice but to think that the size of your cojones is in inverse proportion to that of your boca.