Making Sense of the Okafor-Chandler Swap

Share All sharing options for: Making Sense of the Okafor-Chandler Swap 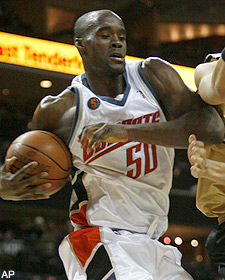 As of right now, there hath been no further clarification or accounting for the phantom Okafor/Chandler deal. (Although it has become official.) But looking at it from a different frame of mind—i.e., barely awake but revving up, as opposed to spent—I can see some logic here. â†µ
â†µ
â†µI did allow New Orleans's very public financial woes to distract me from the fact that Charlotte, too, has major cap and bottom line issues. Maybe not quite as epic, or as on the verge of falling into a river, but that franchise has every reason to clear out space. And let's face it, Boris Diaw has proven himself reborn in Charlotte, and that Alexis Ajinca fellow could very well follow in his footsteps. Risky, maybe, but gambling on Chandler, banking on Diaw, and figuring there's some room for Ajinca to develop isn't so bad. Especially as it helps the money matters, what with Chandler disappearing the year after next. â†µ
â†µ
â†µMore importantly, though, maybe the Hornets have up and realized that if they lose Chris Paul, it's over. Paul's emphatic, sprawling non-comments on his future with the team were meant to end speculation about his future, but served only to underscore that even the All-Galaxy PG had pondered life away from the Hornets, if nothing else as a hypothetical. The Hornets were stupendous in 2007-08 with a Big Three of Paul, West and Chandler. Bad contracts like Peja, Mo Pete, and Posey aren't going anywhere or helping anyone. Why not turn Chandler and all the uncertainty he brings into a healthy defensive stud who can help replicate that winning formula? â†µ
â†µ
â†µFrom the Hornets' standpoint, this is a step away from solvency, and fairly unimaginative. It does, however, speak to their confidence in Okafor, their sense that Chandler is done, and what they see as their best hope to, if not keep Paul around, then keep him in contention. Those two goals are both closer and further apart than any of us can imagine.
â†µ
â†µFor more NBA coverage, visit SportingNews.com's new NBA blog, The Baseline.â†µ