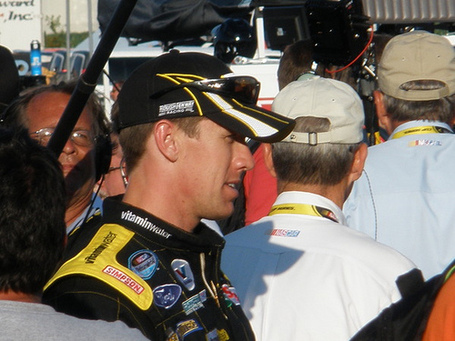 Carl Edwards at the Kroger 200 (via Nationwide Insurance)

After they were unable to qualify their cars because of practice over at Indy’s big track, Carl Edwards and Kyle Busch charged through the pack in the Nationwide Series race at O’Reilly Raceway Park. In the second half of the Kroger 200, those two would trade the lead three times. Edwards would eventually take the win after wrestling the top spot away from Busch, with 22 laps to go.

The interview portion is after the jump.

Carl Edwards:
Kyle and I have run into each other in the past and I got him a little bit off of four one time, but we really race very well together I think. To me, what we just did there is as hard as you can race together without cutting a tire or tearing something up or wrecking each other and that’s fun to be able to do. You can go right up to that limit and this track let us do it and I hope he had fun. He didn’t win the race, but hopefully he enjoyed the race too. That was pretty neat.

Kyle Busch:
You know, it was a tough hard fought battle. We had what we had and we gave it all we could and we came up short. He was better than us all night, I mean he proved it driving by us on the run before and just getting on my inside all of the time. I thought my car was as good as his; I should have been able to stay ahead of him or drive away.

Edwards and Busch were joined in the rear of the field at the start of the race by fellow cup competitors David Reutimann and Matt Kenseth. It was one of the reasons Edwards had a great time coming through the pack.

Edwards:
Yeah, it is really fun. The first 20 laps we were back there and it was Reutimann, Kyle, me, Matt and man it was three wide. I mean I think I almost touched the grass one time I was so low trying to go around those guys and that is fun. I mean it’s rewarding to be able to pass cars like that.

Kenseth would wind up number three across the finish line satisfied he had nothing for Edwards or Busch.

Matt Kenseth:
That long run right before the last caution we were pretty good and we could run about where Carl was running maybe just a little off and I thought we had at least had the second place car and I was complaining about being tight in the middle and we freed it up there probably a little too much and got really loose in and loose off and it was all I can do to hang onto third.

Coming home forth it was Brad Keselowski. For those who thought this 200 lapper at ORP did not have a lot of beating and banging, wasn’t as physical as some prior races, he begs to differ.

Brad Keselowski:
Oh no it was, it was gruesome. You know all of these cars are tore up and have donuts on them. That’s a product of a double foul restart. It’s like when NASCAR signed us up for double foul restarts it’s like we handed our brains away and back to them. We are all animals out there, including myself and we showed it tonight.

With his best finish of the season, Steve Wallace was fifth.

Steve Wallace:
Less satisfying but really it was disappointing all at the same time  I really feel like we had the car to win the race tonight, but that pit stop really killed us and NASCAR really killed us because the pace car pulled out in front of the field. We were still going 100 miles an hour and I ran into the back of the 99 car and we both spun out so that deal there was just really unfortunate but we had a really good car, it was really fast all night and definitely had two wins that we could have won here and in Milwaukee but it’s just pit stops here. They are killing me.

Sixth at the finish was Ron Hornaday Jr. and he was followed by the top 10 by pole sitter Trevor Bayne, Jason Leffler, Scott Wimmer and Kenny Wallace
Grabbing his second Nationwide Series win of the year allowed Carl Edwards to cut 20 points out of his championship deficit to Kyle Busch. But he still trails the leader by 192.

Busch:
For us to be able to beat them we have to pretty much run first every week. We need to have the type of second half that we had last season, we need to win about eight or nine races here and gain some points to make this a competitive point’s battle.

In the last eight outings, Busch has run three races and been the runner up fives times.

The Nationwide Series will return this week to the Iowa Speedway in Newton.  Look for the audio interview following the U.S. Cellular 250 presented by Northland Oil and TMC Trucking.