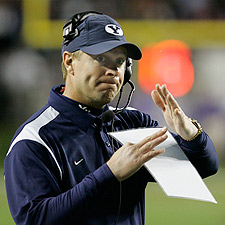 Bronco Mendenhall knew what he was going to say was going to come off creepy and a little mean, so he prefaced an answer to a question about the recruitment of uber-linebacker Manti Te'o like so: â†µ

â†µâ‡¥I am going to try to stereotype as best I can, so I protect their family and BYU. â†µ

â†µSo what follows is not about Manti Te'o, right, it's about a hypothetical Mormon player who didn't show much interest in BYU and eventually decided to go elsewhere, and this just happens to be a statement Mendenhall made after someone asked him about Manti Te'o, but if you were to make any connection between this statement and Manti Te'o, well, that's just speculation on your part. Drum roll, please: â†µ

â†µâ‡¥Usually when a young man who is LDS -- a member of our church -- has things presented as clearly as he had it presented to him and chooses not to come, there usually is a reason they don't want to come. â†µâ‡¥
â†µâ‡¥
â†µâ‡¥And it is usually not football-related. And so Manti chose a private institution, with a religious background without truly the same semblance of rules, or an honor code, like BYU has. It would be great if we don't go into specifics, but my guess is there was something that he didn't want about BYU, and chose elsewhere. And that's OK. â†µâ‡¥

â†µThe "private institution" that lives fast and loose without the rules or honor code BYU has? Notre Dame! â†µ
â†µ
â†µLord knows I'm not the world's biggest fan of the place, but Notre Dame requires you to live in dorms for four years—dorms with talent shows. The university booted Will Yeatman and Joseph Fauria for minor boys-will-be-boys offenses (drankin' and likely streakin', respectively) and suspended point guard Kyle McAlarney for a whole year for getting caught with weed. It's not exactly Miami circa the Michael Irvin Coke Explosion years. â†µ
â†µ
â†µSo what's going on at Notre Dame that isn't at BYU? Drugs, alcohol, nudity, and winning are all out. Dancing? Could it be dancing? I bet it's dancing. Or possibly being around nice young college girls who are exposing their ankles. â†µ
â†µ
â†µAnd that's okay. Because even if we were talking about Manti Te'o's perverted desire to see the ankles of dirty harlots—which I repeat is just speculation on your part—that's his choice. I hope someone (I'm not saying who at all, just someone, you know, just someone, anyone) enjoys hell.â†µ