Dan Patrick Wants to Show You How the Sausage Is Made

Share All sharing options for: Dan Patrick Wants to Show You How the Sausage Is Made

When Dan Patrick left ESPN for presumably greener pastures, it didn’t take long for the Dan Patrick Radio show to get off and running. Now in approximately 200 markets, the DP Radio show is tied in to Sports Illustrated in what seems like, in retrospect at least, a ‘you take Patrick, we’ll take Reilly’ swap. SI got the better end of that trade.  â†µ 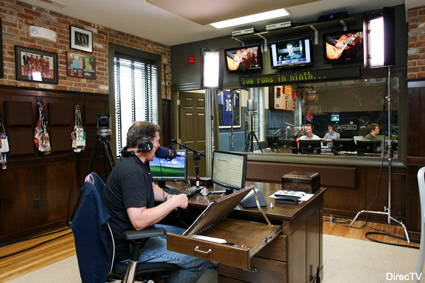 â†µThe one thing that was missing from Patrick’s post ESPN media world was the very thing that made him as famous as he’s become: television. Patrick made his name hosting SportsCenter. He was the on-site host for ABC and ESPN coverage of the NBA. So even if his radio show has blossomed in the untethered world of non-ESPN programming, something was still missing. â†µ

â†µStarting next week, The Dan Patrick Radio Show will be available to watch on DIRECTV’s The 101 Network. According to the satellite provider, you can watch the DP Show every weekday from 9:00-noon. â†µ

â†µFor years, we’ve been able to watch more and more radio shows on TV. Frankly, I’ve never been sure why watching someone talk on radio makes for good TV, but it’s worked in the past for news channels, and ESPN has dedicated most of it’s morning programming on ESPN2 and afternoon programming on the U to ‘radio on TV.’ Most of it is pretty darn boring. So how will Patrick’s show be different from a smack-a-camera-in-the-corner-and-call-it-a-TV-show radio show? â†µ

â†µâ‡¥"I think for a few reasons," Patrick explained via email. "It’s an ensemble show and not just one camera on me for three hours. I didn’t want it to look like a police interrogation video. Also, when we go to break on radio, the DirecTV cameras will stay with us in studio so the conversation that usually happens off the air, will be on TV. Before you ask, I know this can be somewhat dangerous and wide open -- but that’s refreshing." â†µ

â†µThe people involved with Patrick’s show understand they need to do this differently if they expect people to watch. For those who remember the old ‘internet show’ days of DP’s time at ESPN -- and much more famously the internet days of Tony Kornheiser’s old ESPN show that ultimately led to his ‘vacation’ from ESPN Radio -- that is what they hope to give viewers on DIRECTV’s version of Patrick’s current offering.
â†µ
â†µI spoke with executive producer Paul Pabst about what they plan to do to entice viewers to watch the show, without alienating those who listen. â†µ

â†µâ‡¥"What we’re going to try and do is show you what we do. It’s not like we’re showing the moon landing or anything, but it’s interesting, as Dan says, to show how the sausage is made. We’re not trying to say we’re changing the world, we’re just trying to show you ours. â†µâ‡¥
â†µâ‡¥
â†µâ‡¥"You’ll see the messiness of radio. It’s not all smooth like when you listen on the radio. You’ve got a nice rejoin, good content, then break. So what we’re doing here, hopefully, is just showing how a radio show happens during the show and then before and after. When we go to commercial break here, they’re going to stay with us or look in at us or come in early. We’re not necessarily going to know when they are watching us." â†µ

â†µOf course, if most of us knew how sausage was made, Jimmy Dean would have been a poor, poor man. Patrick mentioned the fact that this can be somewhat dangerous and wide open, so I asked Pabst if he thinks they could get caught in some situations they won’t want on the air. â†µ

â†µâ‡¥"We’re probably going to get bit by our own hand before this is over. Sure, we’ll probably be like ‘oh man this guy is coming on. He sucks. Why are we having him on? Oh, his agent said we have to get him on so we can have the better player on.’ You know how the radio business works. But that’s the thing, we’d rather apologize a few times than not show you anything." â†µ

â†µPabst also explained that nothing is off limits, from producers yelling at guests for not calling in on time to staffers trying to get out of commitments with their families to spend more time doing ‘research’ in their new studio. Oh, and the studio? It has a basketball court, a golf simulator and more TVs than the average sports bar. Pabst called it ‘high school with money -- the dream place you build." â†µ

â†µYou’ll see it on Monday morning, but the one thing you shouldn’t expect to see is the old buttoned-down Patrick you got on ESPN. â†µ

â†µâ‡¥"I think people are expecting Dan to have a suit and tie on and a SportsCenter haircut parted to the side. I think they’re going to be surprised that he’s wearing the same shirt two days in a row, like any guy would who has a job where he doesn’t have to work more than a mile from his home." â†µ

â†µHey, I wear the same shirt two days in a row too! And my name is Dan! Now all I need is the golf simulator, the 200 affiliates and this new DIRECTV show. Until then, I guess we’ll all watch the sausage being made together.â†µ