McNair defined the magic of the NFL Draft

Share All sharing options for: McNair defined the magic of the NFL Draft 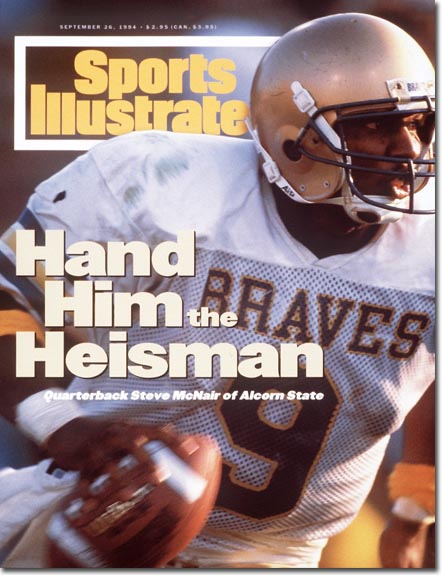 When news of Steve McNair's death came out, it was impossible not to immediately think about his status as an NFL Draft prospect.

Playing for Alcorn State, it was unheard of for a quarterback from a historically all-black  school to be taken in the NFL Draft. McNair was so good, the Houston Oilers took him third overall.

NFL scouts traveled in droves to catch a glimpse of McNair as he shredded opponents in multiple 500-yard performances. Coming out of Alcorn State, a school at the time with 3,300 students, McNair was not some kind of lower-level sleeper. He was an absolute sensation. In tiny Lorman, Miss., he was nearly mythical.

Whenever ESPN would show grainy footage of McNair leading up to and during the 1995 NFL Draft, it was nothing short of an event. McNair had an incredible arm. He was like a power running back in the open field. He broke tackles and the will of defenders. He was tough.

During his senior season, Sports Illustrated even touted him as a Heisman Trophy candidate.

"He's the total package," former Bills director of player personnel Dwight Adams told SI in 1994. "If there's a better athlete—a guy who's got the arm and can scramble and evade and is more durable and more productive—I haven't seen him this year. I've watched him throw the ball on a rope 35 yards consistently, watched him throw 60 yards downfield, watched him run off and run through people. And his judgment...his touch. These guys don't have to break stride when they come out of their turns. The ball is there. This guy's unusual."

What was even greater about McNair was that he seemingly broke that last quarterback color barrier. Doug Williams won the Super Bowl. Warren Moon sustained greatness for a whole career. McNair was the first to be a top draft pick. It's impossible not to think, then, McNair's success played a factor in Philadelphia's decision to take Donovan McNabb second overall in 1999.

Still today, McNair remains one of the greatest quarterback prospects of all time. He was not wasted potential like Ryan Leaf, Todd Marinovich or Vince Young. He was like John Elway and Steve Young – incredible athletes who went on to NFL glory. Much like Jerry Rice and Walter Payton, he was the rare star from the Southwesten Athletic Conference.

It took 13 years for an NFL team to take a Division I-AA quarterback in the first round when Baltimore took Joe Flacco. It's only fitting that McNair's roster spot in Baltimore to be theoretically used by Flacco after his retirement in April 2008.

In the end, though, McNair defined what is great about the NFL Draft.