Roddick Fails to Have His Mickelson Moment

Share All sharing options for: Roddick Fails to Have His Mickelson Moment 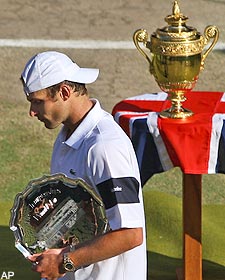 I've never been much of an Andy Roddick fan, whereas I'm a big fan of Roger Federer. But watching yesterday's Wimbledon men's final, even with Fed on the precipice of the all-time record for Grand Slam singles titles, I found myself rooting hard for Roddick, harder than I've rooted for anyone in a very long time. Given the fact that Federer pretty much has owned the Slam circuit for about six years now, while Roddick has tirelessly played the role of Karl Malone/Pat Ewing/Charles Barkley et al. to Fed's MJ, I felt like just this once it was high time for Roddick to have his career-defining moment.

He certainly played a good enough match -- an astonishingly good match, actually -- to have it be so. Throughout most of yesterday's final, I was reminded for some reason of Phil Mickelson at the 2004 Masters. There's a real similarity between Phil and Roddick to me – likable All-American guys with all the talent in the world who never have completely fulfilled their promise, partially because they each are competing against all-time Leviathans of their respective sports, and also due to some psychological stumbling blocks they both struggle with in big moments.

Roddick has one Grand Slam title to his name, the 2003 U.S. Open, which he won just prior to the onset of the Reign of Rog. Since then, he's been inconsistent and altogether shut out of the Slams, despite making four finals (all of which he's lost to Federer). And of course, prior to 2004, Mickelson was toiling joylessly in the Age of Tiger, a big star saddled with that "best player never to have won a major" curse that was beginning to seem like it might haunt him for his entire career.

But then came Phil's fateful Sunday in Augusta, where he conquered his own lack of faith, harnessed his inner urge to self-destruct under pressure, and saw himself through to a transformative victory. What I remember most of Mickelson that day was that he looked different somehow out on the course, right down to the expression on his face, which for most of his round was a strange, beatific semi-grin that seemed to say, “Things are tough, and this is tense, but for once I actually believe I'm going to win.”

Such was the vibe coming off Roddick on Centre Court. Like Mickelson, all too often Roddick's most difficult opponent has been his own mind, but there was something in the way he was carrying himself yesterday that said, “Whatever happens out here, I am not going to beat myself.”

But for one mishap (one that cost him the match, unfortunately), he didn't. Up 6-2 in the second-set tiebreak, he lost six straight points and blew the set, which would have given him a commanding two-set lead and probably would have sealed the match. At that point, I admit that I nearly turned off the television. I've seen this act too many times before, I thought, and I don't need to watch another all-too-predictable installment. It was just looking too much like the same old story with Andy and his wandering mojo – all serve and no nerve.

Thankfully, I stuck it out to the bitter end, and Roddick proved me wrong. Just like Mickelson (who most people forget shot a two-over front nine in the final round of the '04 Masters and briefly surrendered his lead to Ernie Els), Roddick endured a mental breakdown of the kind that would have ended him in the past, and recovered to play the best tennis of his life. He didn't prove his own worst enemy – he didn't succumb to his demons. In fact, by the eternal fifth-set shootout, it appeared as if he'd conquered them once and for all.

Of course, he happened to be playing the greatest tennis player in the history of the sport, that mythological hybrid of Borg and Sampras known as Moby Fed. And thus, playing five near-perfect sets and remaining unbroken on his serve through 14 fricking games of the fifth frame still was only good enough to earn Roddick the plate, not the trophy.

My heart ached for him. It made me think again of Mickelson's many heart-wrenching defeats, how everyone would have felt at the '04 Masters if Tiger had made a charge from nowhere and nipped Phil in the end, if that miracle putt that Mickelson made on 18 was only enough to secure a place in the playoff, and if in that playoff, after nine or ten grueling holes of sudden death, Tiger had won yet another green jacket and left Phil to play bridesmaid yet again.

That's what yesterday's final felt like to me, like it was Roddick's day and yet somehow it wasn't, like the crowning moment of his hard-luck career was stolen from him even though he so clearly deserved it. Which is to take nothing away from Federer. In fact, it's only further testament to Federer's mind-boggling greatness, because, as McEnroe pointed out in the broadcast booth, given the way he was playing, Roddick would have beaten anyone else in the world but Fed yesterday.

You think of Ewing and Malone under the tyranny of Jordan. You think of what Mickelson might have achieved were there no such person as Tiger Woods. And yet, Mickelson's had his share of glory. He broke through at the 2004 Masters and has won two majors since then. For Roddick, after that early triumph at the U.S. Open, there's been nothing but a sense of talent squandered and a series of disappointments, yesterday the most bitter of them all by far.

The Fates are cruel on the big stage. There are no promises. One wonders now if Roddick will ever have his Mickelson moment. I sincerely hope he does, and yet something tells me that it should have been the 2009 Wimbledon final, that the stars were aligned for him in such a way that they may never be again.