Share All sharing options for: Death Race 2009, Now With Legos And Quizzes

I'm quite fond of endurance races, and the more absurd, the better. â†µBlame the original Survival of the Fittest, where as an impressionable youngster we watched a desperate competitor Aussie rappel down the face of a cliff with disastrous effects. This didn't turn out well for the guy, who bounced face first down a cliff, or for me when I tried to emulate the guy off my deck with a length of garden hose looped around my waist. Adventure sports: teaching young people new ways to harm themselves for 30 years and running. â†µ 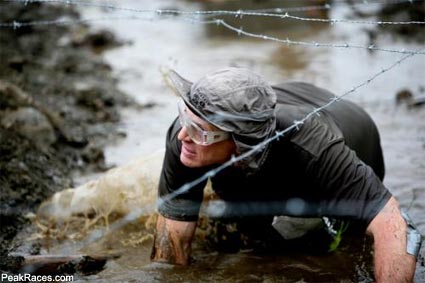 â†µThis, however? This may be the end-all, be-all endurance race madness. â†µUnless you're planning on actually staging The Most Dangerous Game. (If so, please call FOX. They're interested.) Until then, this will have to do as the alpha and omega of nonsensical endurance â†µevents: The Vermont Death Race. â†µ

â†µâ‡¥As the morning sky brightened, Lee forded a river, retrieved a single match (which would become important later), quartered 20 logs, climbed a small mountain, recited the American presidents, swam a lake, assembled the Legos, forded a bigger river and located an egg hidden in the woods. DeSena followed close behind. â†µâ‡¥Together they made for a muddy, bleeding disaster. A passing lawman might have suspected a prison break. â†µ

â†µAnything where the competitors have to sign a waiver saying "I might die," and are offered on-site burial is something I support fully. The article makes the point that finishing it isn't as hard as the competitors think, but never fear. Next year they're putting an enraged Gary Busey and several packs of wolves onto the course just to make things more interesting, which will all work out fine unless Busey eats the wolves. Which he probably will. â†µ