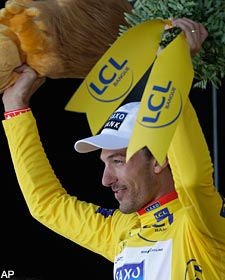 Stage Four in the Tour de France, and the most rage-inducing storyline for the nation of France is just tenths of a second from being real after after today's team time trial. Voila: â†µ

â†µThat is current race leader Fabian Cancellara of Team Saxo Bank, whose team held an overall lead of 40 seconds over the pack at the start of the day, and then promptly lost it to a raging Team Astana. (Team â†µAstana: made strong from Kazakhstani potassium.) Armstrong came within three-tenths of a second of nipping Cancellara for the maillot jaune, an achievement so far ahead of what most expected even at this early stage of the race. â†µ

â†µCancellara shouldn't be shorted, however: with his team struggling down the stretch in the time trial, Cancellara hammered out a slavedriver's pace and all but dragged his teammates across the line to hold yellow going into stage five. Cancellara accepted the yellow jersey from actor Ben Stiller at the end of the stage, which would have confused me if I didn't already know why Stiller was there. Like his movies, the Tour de France is a long, painful, and unfunny affair that leaves you feeling like you've been kicked in the chundle, so he just had to be there, really, as a point of principle. â†µ