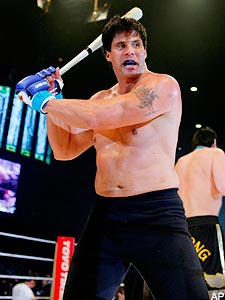 You would have to really work to find new ways for Jose Canseco to embarrass himself. After all, he was KO'd by Vai Sikahema, fought to a draw against former child star/perpetual train wreck Danny Bonaduce and most recently got pummeled by a 7-foot-2 Korean kickboxer. â†µ

â†µBut it's Canseco, and he always finds new and interesting ways to embarrass himself. Here's his latest, which will have him going back from MMA to boxing: â†µ

â†µNow I know what you're thinking: "Chris, what amazing athletic feat is this 'Wing Bowl' you speak of?" Oh, it's this. Yes, chicken-wing eating contestants. Those are the true champions Jose Canseco now faces. On the plus side, at least Canseco might have finally found an opponent he can actually defeat. â†µ

â†µAnd if you're wondering to yourself what sort of high standards were set in previous Celebrity Boxing Federation fights, consider that Celebrity Boxing 9 consisted of a headliner between Lindsay Lohan's father, Michael, and some guy from Survivor named Jonny Fairplay. â†µ

â†µOh, and Sugar Ray Leonard Jr. is part of this organization, too. I'm sure pops is really proud. â†µ